ANDY COLE says FA academy footballers suffered beatings at a boarding school - with him "one of the worst" bullies. The Manchest... 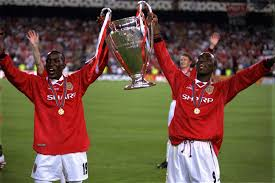 ANDY COLE says FA academy footballers suffered beatings at a boarding school - with him "one of the worst" bullies.

The Manchester United legend described initiation ceremonies targeting the weakest youngsters as they developed their careers away from their clubs.

But former Newcastle and England striker Cole also hit back at his "arrogant" reputation and told the Mail on Sunday: "We were young kids having to start at the bottom and in those days it was part of growing up.

"I’m not going to lie: the ones who didn’t make it, we always said couldn’t hack it.

"In the first week the older boys come down and they pick on who they think is the weakest.

"A year after, the younger boys come in and we’ll do the same thing. And I’ll be brutally honest, I was one of the worst."

There is no suggestion the bullying was connected to the FA's Lilleshall academy, where the starlets trained.

And Cole added: "The school we went to, we actually all looked after each other. It wasn’t like we bullied each other every day.

"It was initiation and after that we’re all 32 boys living together, trying to do the right thing."

Cole's new autobiography Fast Forward lays bare his personal and playing career, including his physical and emotional battles since kidney failure in 2015 and a transplant two years later.

And the 49-year-old also insists the perception of him as arrogant during his playing days was a misunderstanding based on his strict, "tough love" upbringing of only speaking when you were spoken to.