The Man Utd coach helps the likes of Fernandes and Fred improve their game on the training ground under Ole Gunnar Solskjaer. Bruno Fernan... 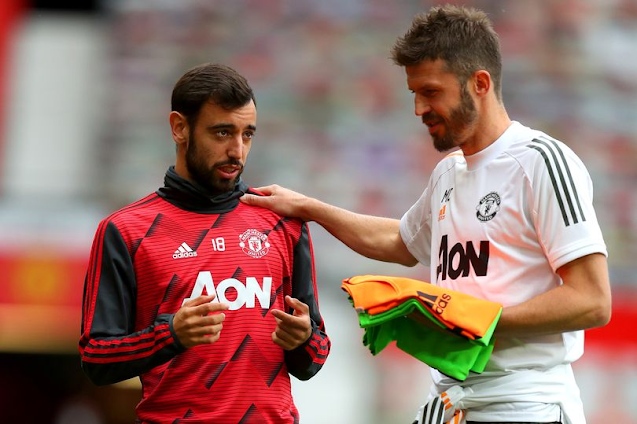 The Man Utd coach helps the likes of Fernandes and Fred improve their game on the training ground under Ole Gunnar Solskjaer.

It is common knowledge that Manchester United's Michael Carrick has been helping Fred step up in the past few months, but Bruno Fernandes has revealed the coach's impact on his own development.

Fred's performances in recent weeks have drawn praise, amid the news that Carrick's successful mentoring of the Brazilian was paying off.

And Fernandes, as well as joking that he would love Fred to become a carbon copy of former United Premier League winner Carrick, has opened up on his admiration for the 39-year-old.

Carrick won 12 major trophies during his United career under Sir Alex Ferguson, including five Premier League titles and a Champions League and he is having a major impact on training ground under Ole Gunnar Solskjaer.

Speaking to the United podcast before the international break, Fernandes said: “Today I was watching in training and Carrick was playing – maybe there was one player less, and some of the players in the last first XI are in recovery – and I was watching Carrick, and he didn’t miss a pass.

"It’s unbelievable how fresh and sharp he is doing the exercises with us, and I was talking with Fred and I was going to say to him, ‘Hey, watch him playing and do the same!’ but I thought it was unfair and so I didn’t say it!

"But it was amazing – if someone from outside comes to watch training, nobody would say this guy isn’t playing in the team. He’s a player who has that quality of passes and also when we need to do some finishing or passing exercises, he’s always there helping us with the balls.

"I’m learning a lot from him and he’s one of the people I like to listen to, because he was a big player, he won a lot of trophies for the club and for me you have to learn from these players."

Fernandes also named his Portuguese international teammate and Wolves star Joao Moutinho as a player he learns from as he develops his midfield game.

"Moutinho and Carrick, they are the sort of players from whom you can learn how to be smart in the game, how to be clever," he added.

"Maybe they’re not the sort of players that kids will watch and say, 'I want to be like Michael Carrick' but when you have one in the team, you know that guy will never miss a pass, you know he will do the smart pass, most of the times will make the right decision, and you need these kinds of players.”

Fernandes then admitted that he struggles to sleep after playing games for United and obsesses over the statistics and analysis of each game. He's made waves so far in his Old Trafford career for the number of goals and assists he's recorded and clearly the homework is paying off.

Fernandes said: “ Normally when I finish a game, I come home and it’s difficult to sleep because of all the energy and also all the caffeine you take before the game to give you energy, all the Red Bulls you drink, and so it’s difficult to calm down, so I come back home and start watching the game. Looking at the points I did well, looking at the points I did bad or I need to improve.