The Portuguese playmaker scored from the penalty spot in Man Utd's 1-0 victory over West Brom at Old Trafford. Bruno Fernandes has ins... 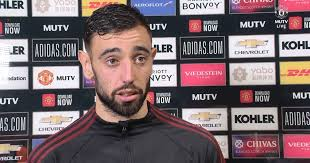 The Portuguese playmaker scored from the penalty spot in Man Utd's 1-0 victory over West Brom at Old Trafford.

Bruno Fernandes has instructed his Manchester United teammates to become more ruthless in the final third after an unconvincing win over West Brom.

The Portuguese scored the only goal of the game in United's 1-0 victory over the Baggies, converting a retaken penalty beyond former Old Trafford keeper Sam Johnstone. It gave Ole Gunnar Solskjaer's side their first home triumph of the Premier League campaign so far, but Fernandes spotted areas for improvement.

The United match-winner spoke to MUTV after the game and assessed the attacking display against West Brom.

Fernandes said: "They played really good football, they were strong at the back [but] I think we can do much better in the final third. Less passing, we need to do much better with the shooting, I think everyone agrees with this.

"The performance was good but we can do better. Today we know it was a tough game and I had the clear chance to score. And I had to score for my teammates because we needed the three points in the league.

"We had some chances. Maybe if we scored in the first half then the game is much easier. Because maybe they open up the game for us. But we had chances and everyone agrees we can have better performances than this.

"We have shown already we have more qualities than what we showed today.

"We don't have to build from here. You build from the losses also. You don't want to lose of course and you don't have to lose to build something, but there are the mistakes to learn from and you have to keep doing the right things."

United will have the chance to build on the West Brom win at home to Istanbul Basaksehir in the Champions League on Tuesday night, before travelling to Southampton in the Premier League next weekend.