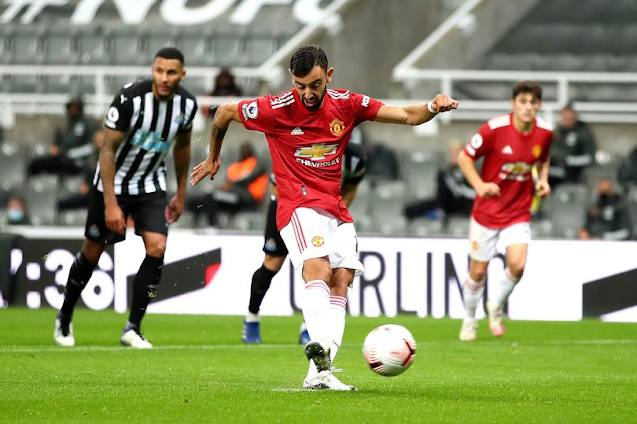 Man Utd star Bruno Fernandes has an impressive penalty record since joining the club in the January transfer window.

Bruno Fernandes reveals he was mocked by his father after missing a penalty for Manchester United during their 4-1 win over Newcastle last month.

The Portuguese playmaker saw his flawless spot-kick record come to an end at St James' Park after a fine stop from Newcastle goalkeeper Karl Darlow.

Fernandes has scored 11 penalties since he joined the club in the January transfer window but saw his impressive run halted at ten in a row after the miss away at Newcastle.

The 26-year-old also saw a spot-kick saved in the Champions League win over Paris Saint-Germain last month but was successful in his effort from the retake.

Fernandes remains devastated by his solitary penalty miss and has revealed how a message from his father after the match spurred him on to score even more.

“And this message says, ‘Congratulations on your goal, but from tomorrow I will start to explain to you how to take penalties!’

“I was like, ‘Hey, I’ve missed one penalty in 11 and he’s talking to me about this’, because he never scored a penalty in all the years he was playing football!

“But this kind of situation helps you improve because all the time you know you have people behind you who will always ask more and demand more from you.”