We’re so excited to announce that Bruno Fernandes will be the next first-team player to appear on the UTD Podcast. Our Portuguese magnifico,... 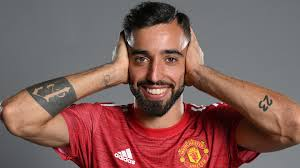 We’re so excited to announce that Bruno Fernandes will be the next first-team player to appear on the UTD Podcast.

Our Portuguese magnifico, who has scored 18 goals in 33 games for the Reds since signing in January, took some time off from tormenting opposition defenders to record the amazing episode, which will be released in full on all of your favourite podcast platforms from the evening of Monday 16 November.

It’s a privilege to spend over an hour with a current United footballer and, in that time, our hosts Sam Homewood, Helen Evans and David May get Bruno to open up on a whole host of rich and interesting topics. 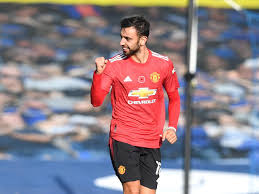 Fernandes explains what was going through his mind when he stepped up to take a penalty against Paris Saint-German at the Parc des Princes and also conveys just how competitive and ambitious a person he is – an attribute which even extends to beating his young daughter at the card game Uno!

In the run-up to the podcast’s release, we’ll be sharing revealing and insightful extracts from the interview, including this rather surprising story about the position Bruno was advised to play as a youngster.

Fortunately for United, he didn’t listen to his coach at the time…

“I played central defender for the most part, when I started playing football, either central defence or right-back,” said the 26-year-old, to the visible surprise of our hosts.

“I liked to play as a right-back because I was aggressive at the time, I was that guy who wanted to give tackles and everything. As a central defender, I was the free one, being prepared to follow the wingers if the right-back wasn’t there and all that.

“I think he was wrong but, maybe as a central defender, I could be much better, I don’t know! At the time I didn’t like to play there, but everyone was saying I was a good defender, they said I was smart, that I covered the sides, but, at one point, I had the chance to go to the team a year-group older than me and I said to the coach look, I don’t want to play central defence any more, but if I have to play central defence, I would prefer to go back and play as a midfielder with the guys my age.

“But when I joined that team, the coach looked at the list of players, and because some were on vacation he said, ‘Oh we have no strikers’ and I said ‘I’m a striker!’ He said, ‘I thought you were a central defender’ and I said, ‘No, I don’t play there any more, I’m a striker!’ So he gave me one try-out in training, I scored twice and he said ‘okay, you can play a striker!’

In his short time with the Reds, Fernandes has established himself as one of the Premier League’s most creative players, laying on 13 assists for his team-mates in all competitions.

His ability to find the net from midfield and thread intricate balls through to his fellow Reds is clear to see, but there’s also growing evidence of Bruno’s ability to get involved in a midfield scrap if he needs to – just watch back Saturday’s 3-1 win over Everton if you require further proof.

That roll-your-sleeves-up-and-get-stuck-in attitude is something that harks back to our no.18’s earliest memories of playing football – and holding his own - against bigger boys.

“I was a difficult boy at the time because I always wanted to play with the older ones and the problem was I didn’t want to just play, I wanted to be the best out of all of them. And if I need to do a nutmeg on someone, I will do it – I don’t care.

“And, at that point, when you play with older guys, they are mad when they see a little boy do that, everyone starts shouting and laughing at them saying ‘Hey, you took a 'meg from a little boy!’

“And then someone can come for you and kick you… so I think sometimes my brother was afraid of this and other times he knew I was good enough to play against them, and so he just doesn’t want problems. Because playing in the streets, you always have problems. And if someone does something to your little brother, you will have to protect him, and sometimes I think my brother didn’t want this!”