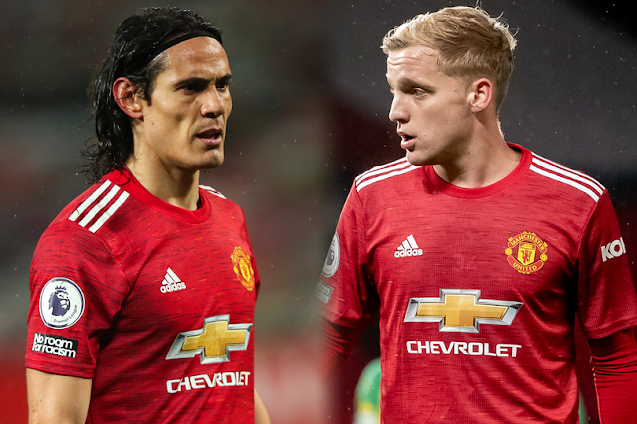 Manchester United are back in Champions League action against Istanbul Basaksehir on Tuesday.

Manchester United could hand Edinson Cavani his first start for the club in Tuesday's Champions League clash against Istanbul Basaksehir.

The Reds were humiliated during the reverse fixture in Turkey, ending their 100 per cent record in Group H following wins against European heavyweights Paris Saint-Germain and RB Leipzig.

United responded to the defeat with wins against Everton and West Brom. A win against Basaksehir will put them in the driving seat to reach the knockout stages of the competition.

Paul Pogba was absent from the United squad that defeated the Baggies and Ole Gunnar Solskjaer is hopeful he will be available after the Frenchman took part in training on Monday.

"We hope he's going to be available," Solskjaer said of Pogba. "He trained this morning, see if there's any reaction when we report tomorrow."

Dean Henderson is yet to start in the Premier League but MEN Sport understand he expects to replace David de Gea between the sticks.

Solskjaer added that Luke Shaw faces four weeks on the sidelines meaning Alex Telles is likely to retain his place at left-back. At centre-back, Axel Tuanzebe could replace Victor Lindelof who has struggled with a recurring back injury throughout the season.

Even if Pogba wins his race for fitness, he is unlikely to start as Scott McTominay could come back into the midfield after starting on the bench at the weekend. He could be joined in the starting XI by Donny van de Beek who has struggled for minutes since joining from Ajax.

In attack, Cavani could be flanked by Marcus Rashford and Mason Greenwood, after the latter also returned to training on Monday following a spell out.