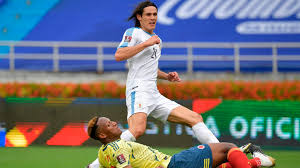 The 33-year-old was named in manager Oscar Tabarez's starting XI, up front alongside Atletico Madrid striker Luis Suarez, on what was his first international appearance since November 2019.Cavani looked like he had never been away and extended his Uruguay goals account after just five minutes, latching onto a Nahitan Nandez pass to execute a low finish past the goalkeeper. The assist and goal bore quite a resemblance to Edinson’s first United strike, scored via a Bruno Fernandes pass to conclude last weekend’s 3-1 Premier League win over Everton at Goodison Park.

Colombia, with in-form James Rodriguez in attack, tried to find a way back into the match and enjoyed more of the ball, yet they couldn’t find a way past Uruguay goalkeeper Martin Campana.The away side doubled their advantage early in the second half from the penalty spot, when former Liverpool man Suarez finished from 12 yards after Rodrigo Bentancur was fouled. A third goal was registered in the 73rd minute via a right-footed shot by Darwin Nunez from outside the box.

Cavani was substituted after 78 minutes and Uruguay’s victory at the Metropolitano Roberto Meléndez leaves them sixth in the CONMEBOL table.

The top-four nations will automatically qualify for the 2022 World Cup, while the fifth-place team goes into an intercontinental playoff for one more place in Qatar.

Uruguay will face Brazil in a huge fixture on Tuesday at Estadio Centenario in Montevideo at 23:00 GMT and we'll have a report on Wednesday morning.Cavani will then travel back to Manchester, as the Reds prepare for a return to Premier League action against West Bromwich Albion on Saturday 21 November.

That Old Trafford fixture will kick off at 20:00 GMT, after an announcement today.