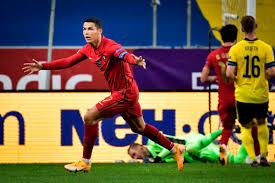 Cristiano Ronaldo is now only EIGHT goals away from becoming the top scoring international footballer of all-time.

Portugal legend CR7 netted in Wednesday’s 7-0 thrashing of Andorra to move to 102 goals in international football, adding to the remarkable 644 strikes recorded throughout his club career.

He is now seven behind Ali Daei’s record of 109 goals scored for Iran, with eight more goals sending Ronaldo clear into first place of the all-time international scorer rankings.

The 35-year-old Juventus forward reached his century for Portugal last month, and he will be hoping to close in on Daei’s record throughout the rest of the November international break with Nations League matches against France and Croatia scheduled. 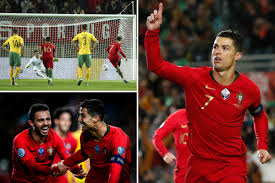 Despite Ronaldo’s undeniable quality for both club and country, recent reports have claimed Juve are preparing to cash in on CR7 next summer.

A return to Manchester United has been rumoured, as well as a transfer to Man City, but Watford forward Troy Deeney believes Wolves is perhaps the perfect destination for Cristiano.

Deeney, who co-hosted talkSPORT Drive on Wednesday, said: “I would more look at a club like Wolves with the Portugal connection – that would work.

“Whoever is getting him is still getting an unbelievable talent.

“You’re not going to get the same Ronaldo you had at Man United. That’s always going to be the comparison.

“You look at Gareth Bale now, for example, he’s gone back to Tottenham and you’re comparing him already to the one that left.

“You’re still going to get goals from Ronaldo, but he’s got to get a season of 30+ plus goals [like he did at United previously] – that’s always going to be at the forefront of everybody’s mind… is he to that level?

“He’s getting older but he’s great in the air and he doesn’t look like he’s slowing down. Physically he’s a beast and from a marketing perspective he adds so much value to whatever club he goes to, so shirt sales would go through the roof.”