Next year marks a decade since David De Gea joined Manchester United as a 20-year-old keeper with so much to prove. Chosen as the club'... 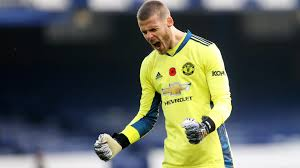 Next year marks a decade since David De Gea joined Manchester United as a 20-year-old keeper with so much to prove.

Chosen as the club's replacement for the legendary Edwin van der Sar, the pressure was on the slender Spaniard from the outset and he made his Premier League debut against Saturday's opponents West Brom, drawing criticism for failing to keep out a goal by Shane Long. After an understandable period of adaptation and intense scrutiny, he has gone on to become one of the world's best in his position.

On the day of United's last outing, the fabulous 3-1 win at Everton, he turned 30 and Inside United, the official magazine, found our latest cover star in a reflective mood as it was time to look back on a remarkable spell at Old Trafford that has seen him win the Sir Matt Busby Player of the Year award four times.

Also Read: WHY DE GEA IS INSIDE UNITED'S COVER STAR

“Well, I'm still the same person I am today but I'm much more mature now,” David told us, when asked what his personality was like when he joined the club in 2011.

“I was coming to massive club, it was different language, a different culture, everything was different and I matured a great deal as person for sure, and I've grown a lot as a player And I'm truly grateful for all these years that I've been here and what can I say? It's been incredible!

“It's wonderful to be here and, to be honest, I feel right at home in Manchester.

“I think you learn from your mistakes, you start to mature and life throws up difficult situations,” he added. “And, of course, you learn from them, from the bad times especially, and I think that's life, isn't it?

“I've learnt lots of things, it's difficult to pick out just one. It's difficult to say but you learn, particularly that times can be tough, you can have difficult periods, especially in this world. There are lots of people who will slate you.

“You'll get it from all sides but it's about believing in yourself, having confidence in what you can do to keep on going and give 100 per cent in every training session, every game, and know that life goes on. You have to show up each day to improve and be happy, which is the most important thing..

At 30, there is still much for De Gea to achieve, and he is determined to add to his one Premier League winners' medal, and he is happy with life at Old Trafford.

“The years have gone by,” he admitted. “There have been good times and bad times but I'm doing well now,

“I’m really content with everything I have and all that I have achieved and I’m looking forward to the future, which will hopefully bring many more years. Being at a club like this and at this level for so many years, isn't easy so I'm proud of that and bring on some more!”