Alex Telles is back with Manchester United after a long trip to South American to sit on Brazil’s bench for two World Cup qualifiers. The ... 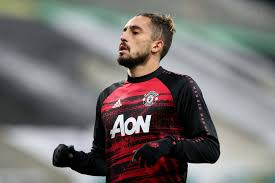 Alex Telles is back with Manchester United after a long trip to South American to sit on Brazil’s bench for two World Cup qualifiers.

The deadline day signing should now be ready to make his first Premier League start for United on Saturday.

Luke Shaw is out injured which clears the path for Telles to walk straight into United’s starting XI.

Brandon Williams will be fighting his corner too, but if Telles can show he is fully fit, then he should get the nod against West Brom at Old Trafford.

Irwin told the club’s official website: “There’s no doubt that, on set-pieces, he’s going to be a huge asset to us in that respect.

“Also, I’m not going to compare him to David Beckham! But it looks like he’s got a fantastic left foot that can whip a ball in with pace, which our strikers would love to get in at the end of.“

Irwin added that he has not seen enough of Telles defensively to form a judgement, but he believes the Brazilian has a chance to now to seize the role.

He said: “It’s an opportunity for him now, with the games coming up, to get his foot in there.”

Shaw is out with a hamstring injury. The same injury kept him out for around three months last season.

Telles’ only game for United so far was a 66 minute showing in the win over PSG.

While Irwin is cautious and is not ready to anoint him with quite the same praise just yet, Telles is a player who can give United something the club have been lacking for years with his deliveries.

The only thing lacking has been consistent training time with his teammates to get on the same page.