Denis Zakaria has impressed for Borussia Monchengladbach. The second international break of the Premier League season is upon and Manchester...

The second international break of the Premier League season is upon and Manchester United fans must be wondering whether Paul Pogba's future at the club will be discussed in the French press.

It's becoming a regular occurrence that Pogba's situation at United is discussed in depth whenever the midfielder travels to Clairefontaine for international duty.

Back in October, Pogba openly flirted with the prospect of joining his countryman Zinedine Zidane at Real Madrid as his United contract approaches its end. He said: "We have all heard these things that have been said. What to respond? Yes, all footballers would like to play for Real Madrid. Maybe it is a dream. It is a dream for me, why not one day? As I have said, I am at Manchester United and I like my club."

Following his comments, Pogba has started just two games under Ole Gunnar Solskjaer and is rapidly slipping down the pecking order with United thriving with a midfield partnership of Scott McTominay and Fred. French manager Didier Deschamps fuelled speculation over his future earlier this month by suggesting the World Cup winner is unhappy with his position at Old Trafford.

He said: "Paul, I know him well and he knows the group well. He is in a situation with his club where he cannot be happy, neither with his playing time, nor with his positioning."

Following his return from injury, Pogba has mostly been deployed the base of midfield alongside Nemanja Matic in a deeper role than his creative counterpart Bruno Fernandes. It has been argued by many that this role restricts his best attributes and negatively impacts the United team given his lack of defensive discipline. It could also explain why Solskjaer has preferred using both McTominay and Fred in the role in recent weeks.

Former United star Gary Neville proposed the idea of utilising both Pogba and Fernandes in a 4-3-3 system used to devastating effect by United's rivals Liverpool and Manchester City on their way to lifting Premier League titles.

Jurgen Klopp's system consists of his three midfielders providing the energy and dynamism to allow the creative forces of Andy Robertson and Trent Alexander-Arnold to provide for the famed front three of Roberto Firmino, Mohamed Salah and Sadio Mane. At the Etihad, Guardiola has often deployed two offensive midfielders, such as Bernardo Silva, Kevin De Bruyne or David Silva, in order to slice teams apart with incisive passes to a pacey frontline.

Two varying styles with one common denominator - a holding midfielder. It was no surprise when Liverpool's £40million capture of Fabinho from Monaco resulted in Klopp's side lifting both the Champions League and Premier League title while City dominated domestic football in England with Fernandinho at the peak of his ability as the anchor in Guardiola's midfield.

To implement Neville's suggestion, United would need a dynamic, combative defensive midfielder that can provide support to the back four while allowing Fernandes and Pogba to express themselves. Nemanja Matic is the most natural DM in the United squad but isn't mobile enough to play such a role while there are doubts over Fred's natural defensive ability. 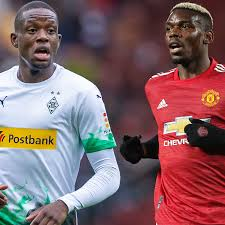