Diogo Jota has been in sensational form after joining Liverpool over the summer and he has now scored more Premier League goals at home th... 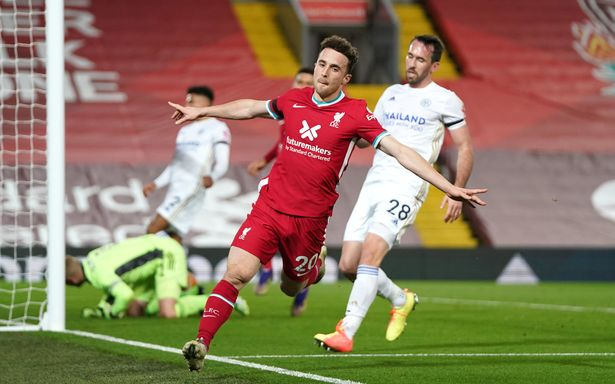 Diogo Jota has been in sensational form after joining Liverpool over the summer and he has now scored more Premier League goals at home than Manchester United.

Diogo Jota's goal against Leicester City in Liverpool 's 3-0 win saw the new signing become the first player in the club's history to score in his first four league games at home.

Bruno Fernandes scored United's most recent goal at home, with the playmaker netting from the penalty spot in their 1-0 win over West Bromwich Albion at the second time of asking.

The goal sealed a first league win at Old Trafford for United this season.

Jota has been in excellent form since sealing a £41m move from Wolves over the summer, with the 23-year-old scoring eight goals for the Reds in ten appearances in the Premier League and Champions League.

Reflecting on the win and his own form after the game, Jota told Match of the Day: "Playing in this team, world champions, means a lot, I just wish we can keep winning matches and I can be important as well, of course.

"We did a great job, offensively, creating chances, as well as defensively. In the end it was a great match. Every squad feels the same, everyone can be important, we need everyone physically and mentally ready to help us.

"It is three points, but they were there near the top, on Wednesday we go again."

Liverpool legend Kenny Dalglish has been impressed by Jota's instant impact at the club.

Speaking to the Liverpool Echo, Dalglish said: "For Diogo to come in and score as freely as he has done and to make such an impact, not always having played the full game, will do him a world of good.

"The belief he'll have in himself and the confidence supporters will have in him too. It's important when someone comes in and settles straight away, for the player and the club, just look at the contribution he has made."