The Man Utd and Netherlands midfielder has struggled for game time under Ole Gunnar Solskjaer since his summer transfer from Ajax. Manches... 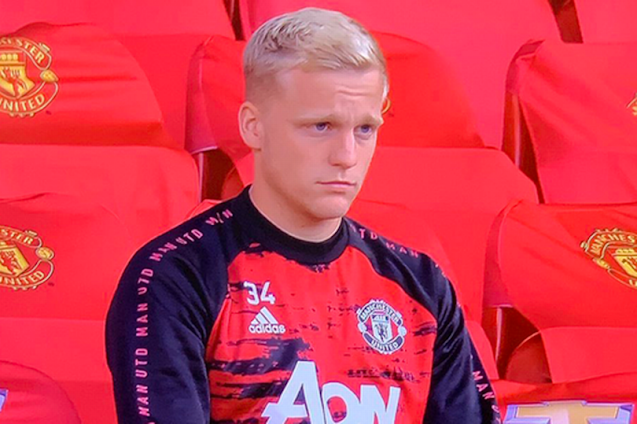 The Man Utd and Netherlands midfielder has struggled for game time under Ole Gunnar Solskjaer since his summer transfer from Ajax.

Manchester United may have learned some valuable lessons, without playing, over the past fortnight.

Manchester United may have learned some valuable lessons, without playing, over the past fortnight.

While more Paul Pogba issues have arisen thanks to Didier Deschamps (and more of the player's own comments), and injuries continue to threaten Ole Gunnar Solskjaer's squad, there have been positives — if you look hard enough.

United will have been encouraged to see Donny van de Beek find the net for the Netherlands against Spain, albeit in a fairly low-key friendly. The 23-year-old was only a substitute in his country's 3-1 win over Bosnia and Herzegovina on Sunday, but he should play a key role in the upcoming Nations League game against Poland.

Solskjaer will hoping that Van de Beek doesn't go the same way as Luke Shaw and others and suffer an injury in that game. Because despite under-using the former Ajax playmaker this season since his £35million transfer to United in the summer, the Norwegian has vowed that Van de Beek will get the game time that many are calling for.

MEN Sport understands Van de Beek would be open to a temporary switch of position, should it be needed over the coming weeks and it may well be a wide berth that soon hands him his big chance.

Solskjaer is a huge admirer of Van de Beek's all-round game and it's a compliment to his football intelligence that the Dutchman is considered versatile enough to play in multiple positions. Yes, he may be a No.10 by trade. But Solskjaer, speaking after the victory against Brighton in the Carabao Cup earlier this season, suggested Van de Beek can play virtually anywhere.

"He’s got very high footballing intelligence and tactically he’s gone through the Ajax system. Dutch football is tactical, he knows football, he's got his head screwed on," Solskjaer said

"He’s a different type of left-sided player compared to Dan James and Marcus Rashford but coming inside and finding good pockets why not, he can play loads of different positions, which sometimes is a strength for a player.

"I remember myself sometimes, right-wing, left-wing centre forward, No. 10, Donny is one the coach will always look to have in a squad."

Van de Beek himself may secretly prefer to play as a number 10, but with United short of options out wide — especially given that Rashford is doubtful for this weekend's game against West Brom with a shoulder problem — it could be the perfect time to adapt. Bruno Fernandes, Fred and Scott McTominay looked to have tied up the three central positions in midfield for the time being, after impressing against Everton.

And publicly, at least, it sounds like Van de Beek wouldn't mind the change. As the rather stoney-faced camera shot of the player when rooted to the bench throughout the recent 0-0 draw with Chelsea showed, he will just be happy to start.

"I play everywhere on the midfield," Van de Beek said.

"Last season I changed a lot, sometimes a number 6, number 8, number 10. It doesn't matter so much, but I think one of my strengths is to come in the box and score goals, making assists.

"If you have this freedom then you can play everywhere I think. The balance always has to be good in the team, you have to play smart."

Throughout his seven years at the club, United have used Juan Mata on the right probably more often than in the No.10 role for which he was famed at previous clubs Chelsea and Valencia. Ashley Young and Antonio Valencia developed into more able full-backs than wingers as their United careers progressed. History is littered with examples of players shining from positional changes that many were hitherto sceptical about.

So with Mata standing in for Mason Greenwood and a spot potentially opening up on both United wings soon, following their failure to land Jadon Sancho or a first-team wide player in the summer, it may be another 2020 arrival that fills in and enjoys some success.

Van de Beek has the tools to succeed out wide, as we may well see against West Brom on Saturday,