Manchester United are back in Premier League action on Saturday, when they welcome West Brom to Old Trafford for a 20:00 GMT kick-off. With ... 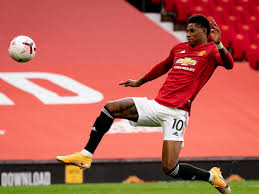 Manchester United are back in Premier League action on Saturday, when they welcome West Brom to Old Trafford for a 20:00 GMT kick-off.

With international football now done and dusted until 2021, the start of a hectic period pits Ole Gunnar Solskjaer's Reds against a Baggies side that has struggled since gaining promotion back to the top flight.

After the encouraging win at Everton last time out, United are seeking a first home win of the league term in order to continue pushing up the table.

The first priority will be to assess those who have been away representing their countries, with question marks hanging over a number of players. We will not know more until we speak to Ole on Friday for his pre-match interview, and he will also hold a press conference with the wider media.

Marcus Rashford was forced to withdraw from England duty after picking up a shoulder injury at Goodison Park and Anthony Martial reportedly had a minor back problem that stopped him training with France. On the plus side, Mason Greenwood has been training with the Reds after missing the victory on Merseyside and should be available.

Edinson Cavani had an up-and-down time with Uruguay, scoring against Colombia but then being sent off in a defeat to Brazil, and he will be hoping to add to his maiden strike for the club two weeks ago.

In terms of midfield options, Fred, Nemanja Matic and Juan Mata have been among the group working diligently at the Aon Training Complex during the international break, while Scott McTominay, Daniel James, Donny van de Beek and Paul Pogba have all had positive experiences with their countries.

Bruno Fernandes was withdrawn at half-time during Portugal's 3-2 win over Croatia but there has been no mention of an injury from the Portuguese camp. Jesse Lingard looks to have been stepping up his return to fitness in training and cannot be far away from a possible return.

In defence, Alex Telles should now be an option at left-back after testing negative for COVID-19, even if his lengthy journey to South America for Brazil's World Cup qualifiers must be a factor. It would be a timely boost if he can play, with Luke Shaw out with a hamstring problem, although Brandon Williams is another of the options and Axel Tuanzebe came on at Everton in that position. Marcos Rojo has also had an outing for the Under-23s recently.

Victor Lindelof's back continues to cause some concern and he was withdrawn in Sweden's defeat to France amid worries over the problem, while Harry Maguire performed superbly for England. Eric Bailly did not represent Ivory Coast and is presumably still injured, along with Phil Jones, but Tim Fosu-Mensah and Aaron Wan-Bissaka have been training all week and Teden Mengi appeared for the Under-21s in the Papa John's Trophy defeat at Morecambe.

NEWS FROM THE BAGGIES

The Baggies have lost on only one of their last five visits to Old Trafford, keeping three clean sheets in the process.

Sam Johnstone, who won the FA Youth Cup with United in 2011, returns to the Theatre of Dreams for the first time since leaving the club but there is a wait to discover if Branislav Ivanovic, Matheus Pereira and Callum Robinson are over COVID-19-related absences.

Slaven Bilic has confirmed that “a few” of his players tested positive for the virus but both Ivanovic and Pereira are training again and Robinson should be cleared before the weekend, after withdrawing from Republic of Ireland duty.

Sam Field and Wales international Hal Robson-Kanu are out through injury.