E dinson Cavani and Harry Maguire were among those absent from Manchester United's training ground on Thursday, as many players report... 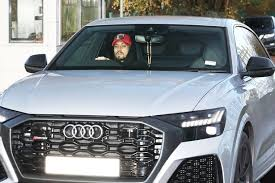 Edinson Cavani and Harry Maguire were among those absent from Manchester United's training ground on Thursday, as many players reported back from international duty.

Ole Gunnar Solskjaer's squad gathered at the AON Training Complex in Carrington on Thursday morning for Covid-19 testing and a training session. United will assess their players' availability for the upcoming game against West Brom in the Premier League on Saturday night.

Jesse Lingard and Scott McTominay were also absent, with the Scot having only arrived back from an international game in Israel in the early hours of the morning. Lingard and Eric Bailly, who also missed training, have been been struggling with injuries of late, though the Warrington-born midfielder trained last week.

Maguire suffered a bruised foot while playing for England against Iceland at Wembley last night [Wednesday] and is understood to be a doubt for the West Brom clash.

Alex Telles, Victor Lindelof, Mason Greenwood and Marcus Rashford all reported for training as normal, amid fears they could be unavailable for the weekend. Lindelof has been hampered by a back issue of late, while Rashford pulled out of England duty with a shoulder complaint. Luke Shaw was also spotted arriving at the training ground, though he won't play against West Brom due to a hamstring injury.

Solskjaer is due to provide an extensive injury update at his weekly press conference on Friday morning.