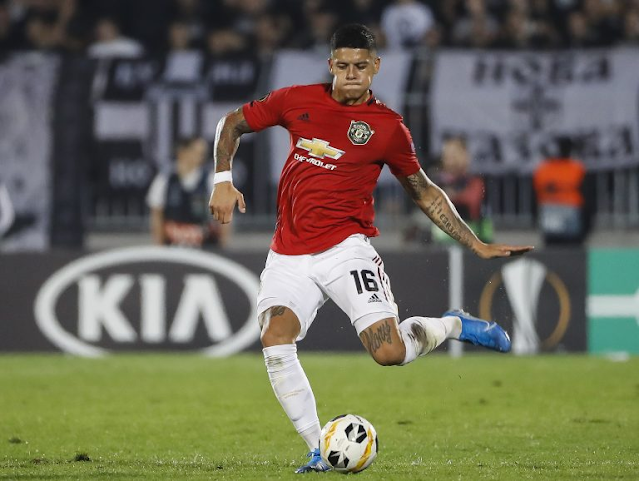 Why Manchester United should sell Marcos Rojo in January

According to a report by Manchester Evening News, Manchester United are keen to sell out-of-favour defender Marcos Rojo. The 30-year-old Argentine has been way down the United pecking order and hasn’t played a single minute this season.

Manchester United have tried to sell Rojo in five of the last six summers. Solsjkaer wants to offload Rojo alongside three other players that include Phil Jones, Sergio Romero, and Timothy Fosu-Mensah.

Man United have no need for Marcos Rojo

The Argentine centre-back has not seen a single minute of first-team football this season. United have stuck to the pairing of Victor Lindelof and Harry Maguire at the back. Despite United not having many options at the back, Rojo hasn’t been named in Solskjaer’s squad even once this campaign.

The Argentine has started in just 11 league matches for Manchester United since the start of the 2017/18 season. Rojo was deemed surplus to requirement in January 2020 and was loaned to his hometown Argentine side Estudiantes. The Argentine started just one game there. (h/t transfermarkt)

Marcos Rojo’s contract expires in the summer of 2021. With the Argentine set to turn 31 next year, this seems like the right time for Solskjaer to sell him. Signed after his impressive displays for Argentina en-route to the 2014 FIFA World Cup final, Rojo could never stomp his authority on United’s team sheet.

In his six full seasons at the club, he has started just 64 Premier League games. That goes to show how United never saw him fulfill the potential he showed six years ago in Brazil. With age not on his side, and his contract quickly running down, Solskjaer would be wise to part ways and trim his ever-increasing United squad.

Manchester United paid £16m million to Sporting CP for Rojo in August 2014 and renewed his deal in 2018 that saw his wages increase to £80,000-a-week. Selling Rojo for any amount would mean recouping at least some of the money spent on him, and getting a hefty sum off the salary books.

Ole Gunnar Solsjkaer is on the lookout for opportunities to trim his squad. An out-of-favour Marcos Rojo with little to no recent first-team football seems like the right place to start, considering the Argentine’s contract runs out in the summer of 2021.

If Solskjaer doesn’t capitalize now, he could stand to lose the player on a free transfer. The Manchester United manager would be very shrewd to conclude any deal that sees Rojo leave Old Trafford this January.