Manchester United boss Ole Gunnar Solskjaer could dip into the January transfer market with the Norwegian looking for key reinforcements. ... 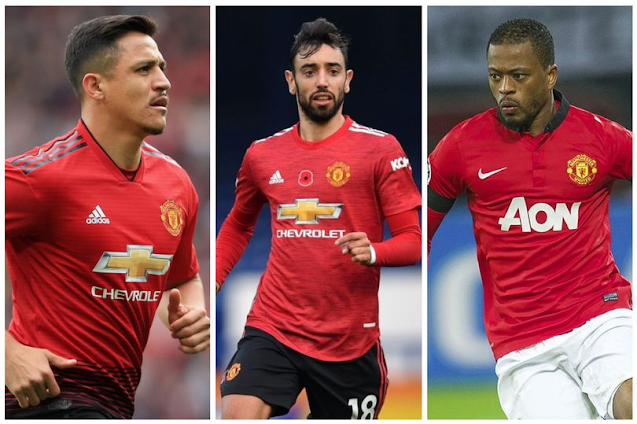 Manchester United boss Ole Gunnar Solskjaer could dip into the January transfer market with the Norwegian looking for key reinforcements.

Solskjaer brought in £75m worth of talent in the summer, with Donny van de Beek, Amad Diallo, Alex Telles and Facundo Pellestri and Edinson Cavani arriving at Old Trafford.

However, with injuries beginning to pile up in his squad, Solskjaer could make some bold moves at the start of 2021.

But despite the temptation to bring in new faces mid-way through the season, the January window has yielded mixed results for United and Solskjaer needs to tread carefully to avoid a major error.

We look at the best and worst United winter arrivals since the first Premier League January window in 2003.

Sir Alex Ferguson opted against making any January signings in 2003 as his side secured a 15th Premier League title in May.

Saha played a key role for Ferguson in his first six months at United, netting seven Premier League goals in 12 appearances, despite United slipping to the third and conceding the title to Arsenal.

An FA Cup win ensured a positive end to Saha’s first months at the club, and despite struggling with constant injuries in the following four seasons, he left for Everton in 2008 with a solid record of 42 United goals in 124 appearances.

Dong Fangzhuo joined at the same time as Saha, but his four years at the club were less impressive with just one Premier League appearance.

Determined to chase down Mourinho 12 months later, Ferguson brought in two key defensive targets in January 2006 with Nemanja Vidic and Patrice Evra arriving from Spartak Moscow and AS Monaco respectively.

Despite failing to stop Chelsea’s title defence, the arrivals of Vidic and Evra formed the basis of a period of future dominance for United, with the pair amongst the club’s best-ever Premier League signings.

The arrival of Henrik Larsson on a six-month loan from Helsingborgs was not greeted with a huge amount of excitement despite his stellar career at Celtic.

The Swedish international played a rotating role with Solskjaer and Saha, alongside Wayne Rooney and Cristiano Ronaldo, as United overhauled Chelsea to reclaim the title.

He netted vital goals in the FA Cup Third Round win over Aston Villa and United’s Champions League last-16 victory over Lille, but he honoured his agreement to return to Helsingborgs in 2007, before retiring in 2013.

With United cruising in their title defence in 2008, Ferguson opted not to upset the rhythm of his first-team and brought in two potential future stars in Rodrigo Possebon and Manucho.

However, despite initial promise, the pair can both be filed under ‘forgettable’ in the minds of United fans.

Possebon made three Premier League appearances in 2008, before joining Braga on loan that summer and returning to Brazil in 2010 to kickstart a nomadic career with low key spells in Italy and Vietnam.

United looked to have unearthed an unpolished diamond after bringing in Manucho from Angolan side Petro Ateltico.

His United career proved even more unremarkable than Possebon’s, with just one Premier League appearance before joining Real Valladolid on a permanent deal in 2009 and establishing himself as a cult icon with Rayo Vallecano during his 2014-2018 stint in Madrid.

Another January window and another promising star signed as Zoran Tosic joined in a £6.5m deal from Partizan Belgrade.

The Serbian international struggled to force his way into Ferguson’s all-star attack, and despite showing flashes of promise, he joined Russian club CSKA Moscow 12 months later.

He played a key role in the Foxes top-flight promotion in 2014 before signing for Aston Villa in 2016 and returning to boyhood Royal Antwerp last season.

No new faces in the January 2010 market as United’s push for a fourth successive Premier League title was ended by Carlo Ancelotti’s Chelsea.

Ferguson boosted his goalkeeping options in January 2011 as Anders Lindegaard joined from Aalesund.

The Danish international did not make a single Premier League appearance in his first season at United with Edwin Van Der Sar remaining injury-free.

But despite David De Gea now being in his second season at Old Trafford, Lindegaard made 10 league starts in 2012-13 to secure a Premier League winners medal before joining West Brom on a permanent deal in 2015.

Another quiet one for Ferguson in 2012.

Ferguson’s final signing before retiring at the end of 2012/13 was Crystal Palace star Wilfried Zaha.

As part of the agreement with Palace, Zaha returned to Selhurst Park on loan for the remainder of the campaign, before joining United in the summer.

Zaha’s struggles to settle in Manchester and the difficult early days of David Moyes’ tenure are well documented, and the unhappy midfielder rejoined Palace on loan in June 2014 before completing a permanent return in 2015.

The 28-year old has bounced back from his Old Trafford nightmare to become one of the most consistent wingers in the Premier League, playing a talismanic role for Roy Hodgson’s side ever since.

Mata quickly adapted to life at United, with six goals in 15 Premier League games in the second half of 2013/14.

He bettered that with 10 in all competitions in the following campaign, and despite moving into a squad role in recent seasons, the likeable midfielder remains a firm fans' favourite.

Louis Van Gaal decided against bringing in any new faces in his first winter market at the club in 2015.

More of the same from Van Gaal in 2016 as he stuck with his squad before being sacked in May, with Ryan Giggs taking caretaker charge.

Mourinho followed the example of his predecessor in January 2017 with no signings coming into the club.

After failing to secure certain attacking targets during the summer market ahead of the 2017/18 season, Mourinho swooped for Arsenal star Alexis Sanchez.

The arrival of Sanchez was another chapter in the two clubs' fractured relationship following Robin Van Persie’s controversial arrival in 2015.

Sanchez came nowhere near matching the impact of his former Gunners teammate at Old Trafford, despite arriving on the back of a sensational spell with Arsene Wenger’s side.

The Chilean international’s contract was a big source of controversy in his early days at United and after failing to ignite his career under Solskjaer in 2018-19, he joined Inter Milan on loan.

With Solskjaer determined to remove him from the wage list, the 31-year old completed a free transfer to the San Siro this summer, with United taking a major financial hit as a result.

The cautious first January theme continued with Solskajer in 2019 as he stayed out of the market.

Solskjaer secured the vital and prolonged signing of Bruno Fernandes in January 2020 with the Portuguese international having a transformative effect on the team at the back end of 2019/20.

His impressive midfield displays propelled United to a Top Four finish and he has established himself as arguably Solskjaer’s most important player this season.