The wait is nearly over, as Manchester United return to Premier League action this weekend with a Saturday night (20:00 GMT) encounter aga... 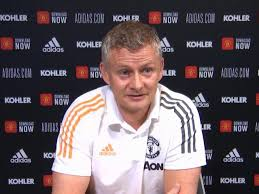 The wait is nearly over, as Manchester United return to Premier League action this weekend with a Saturday night (20:00 GMT) encounter against West Brom.

It is a rare time-slot for a fixture at Old Trafford, but the Reds will hopefully be raring to go following the final international break of 2020.

It's really a case of full steam ahead for the Reds, as we look to build on the 3-1 victory at Everton last time out, when Bruno Fernandes scored twice and Edinson Cavani got off the mark, and we look forward to Ole Gunnar Solskjaer's press conference with relish as he should provide an update on the state of his squad's fitness heading into the game with Slaven Bilic's Baggies.

The manager will speak to us and address the media at his press conference (which is scheduled for 13:00 GMT) via video call, due to the current COVID-19 restrictions. It is embargoed until 13:30 GMT, when we will run the video in full in the Official App and on ManUtd.com.

He will also provide a separate interview for the national newspapers, which is embargoed until 22:30 GMT on Friday night.

In addition to bringing us up to speed with the latest team news, the boss will be wary of the threat West Brom pose, despite their winless start and lowly position of 18th in the table.

The Baggies actually have a great record at Old Trafford, with two victories and two draws from their last five visits, and won 1-0 on their last competitive fixture at the ground. We also played them in a friendly before Project Restart earlier this year.

Our win during this period came in November of 2015, when goals from Jesse Lingard and Juan Mata (a penalty) secured a 2-0 triumph.

Aside from the press conference, which will obviously be our main focus, we'll also hear from Fred on how he expects everyone to play their part in the upcoming schedule.

Later, there is the draw for the knockout stages of the Papa John's Trophy, with Neil Wood's side set to discover our next opponents around 18:15 GMT. The tie will be played in the week commencing Monday 7 December and the final will be staged at Wembley on Sunday 14 March 2021. We shall bring you the details of the draw.

A reminder that the home Premier League 2 clash with Tottenham, originally scheduled for this evening, now takes place on Sunday (17:00 GMT) and is live on MUTV.