The Man Utd captain was sent off against Denmark in October's Nations League game to compound a disastrous start to the new season. Ha... 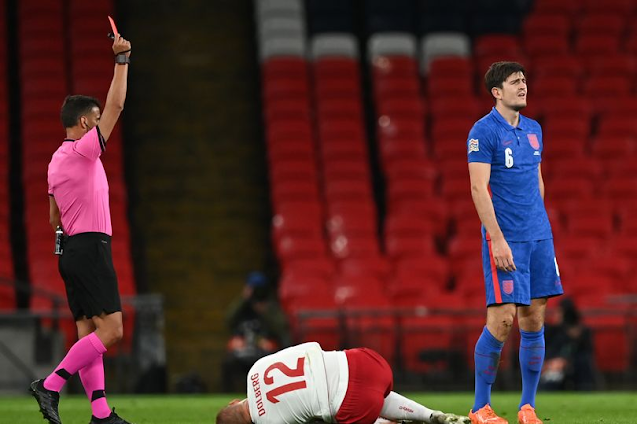 The Man Utd captain was sent off against Denmark in October's Nations League game to compound a disastrous start to the new season.

The Manchester United centre-back came in for plenty of criticism in the 1-0 defeat as he saw red for a reckless challenge after 31 minutes in a performance that looked ill-at-ease.

With the display coming hot on the heels of another nightmare performance in United's heavy defeat to Tottenham Hotspur, it prompted speculation that Maguire needed a break after his highly-publicised arrest in Greece during the close-season.

Yet he has bounced back with some good form and scored England's opening goal in their 3-0 win over Ireland on Thursday night - a game that also saw the 27-year-old don the captain's armband.

It was Maguire's second international goal after he also netted in the 2018 World Cup against Sweden.

His performance earned praise from England boss Southgate, who admitted he feared the worst after the performance against Denmark.

Despite that display, Southgate said it was vital to get Maguire back into the England team as soon as possible.

"I was really pleased with Harry," Southgate said.

"I felt that the red card could bottom everything out. You could see on his face when he was walking off the pitch that night against Denmark, how he was just having one of those spells where he must have felt everything was against him.

"I had some good conversations with him and I know his club would have supported him and his club performances were solid after that.

"Against Ireland I thought it was important to get him back in an England shirt. It was a lovely moment for him to captain the team and to get the goal as well is a real boost – so that was great to see."