The France international's form for United has come under the spotlight of late Manchester United midfielder Paul Pogba is suffering fro... 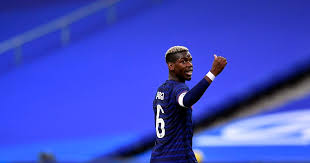 Manchester United midfielder Paul Pogba is suffering from a lack of 'rhythm', according to his international teammate Hugo Lloris.

Pogba's form for United has come under the spotlight of late, having been unable to hold down a regular starting spot under Ole Gunnar Solskjaer this term.

Questions have been raised about his future at the club, with the player himself admitting that it would be a "dream" to join Real Madrid.

Pogba is currently on international duty with France - and played just under an hour of the shock 2-0 friendly defeat at home to Finland before being substituted.

National team boss Didier Deschamps admitted that Pogba was not at his best, saying: "Like all players who have a club situation that is not positive, they are also impacted mentally.

"I know him well enough and it can happen at some points."

"He lacks a bit of rhythm, compared to his situation at his club," said the Spurs captain.

"Like (Raphael) Varane or (Antoine) Griezmann, he comes with a smile.

"We see him ready to meet the challenges, the jersey of Les Bleus is close to his heart.

"He is one of the leaders of this team. He has a long history (with France) and also knows how to raise his level when necessary, especially when there is adversity. "(On Saturday), he will be keen to do well."

After facing Portugal at Benfica's Estadio da Luz in Lisbon, France then take on Sweden in Paris on Tuesday evening, in their final Nations League Group A3 match.