Manchester United will monitor the fitness of centre-back Victor Lindelof, after he was substituted during Sweden’s 4-2 UEFA Nations Leagu... 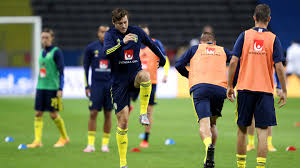 Manchester United will monitor the fitness of centre-back Victor Lindelof, after he was substituted during Sweden’s 4-2 UEFA Nations League defeat to France on Tuesday.

Victor missed our visit to Istanbul Basaksehir in the Champions League at the start of the month with a back issue, but came through the 3-1 win at Everton unscathed.

However, Sweden assistant-coach Peter Wettergren reported that Lindelof had experienced pain after their 2-1 victory over Croatia on Saturday.

Although our no.2 trained earlier in the week and started against the world champions, he was eventually replaced by Filip Helander on 66 minutes, after initially looking like he would be withdrawn at half-time, as the Scandinavians lost the game and suffered relegation to Nations League Group B.

While Paul Pogba played a full part in the French victory, United’s Anthony Martial remained on the bench.

Our no.9 trained alone earlier in the week amid reports of a back problem sustained during France’s 1-0 win over Portugal on Saturday.

As with Lindelof, Martial will be due back at the Aon Training Complex later this week, where he will be assessed.

Elsewhere in Group A3, Bruno Fernandes played the opening 45 minutes as Portugal beat Croatia 3-2 in Split.

Fernandes was replaced by Barcelona’s Trincao at half-time in what appeared to be a tactical change, after he had featured for 72 minutes at the weekend, so hopefully he should be fine for the weekend encounter with West Brom.

In the South American World Cup qualifying showdown between Uruguay and Brazil in Montevideo, Edinson Cavani was harshly sent off midway through the second half for a challenge on Everton’s Richarlison – although this will of course have no bearing on his availability for Saturday.

Alex Telles was an unused substitute for Brazil. On Tuesday, it was announced that our no.27 had tested negative for COVID-19 and he could therefore be involved at the weekend.

Ole Gunnar Solskjaer may provide further updates on his squad when he faces reporters for his pre-match press conference on Friday.