Five Manchester United players were in action as the international break came to a close on Wednesday evening - and Daniel James stole the... 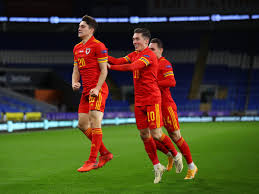 Five Manchester United players were in action as the international break came to a close on Wednesday evening - and Daniel James stole the show!

The 23-year-old was named in the Wales starting XI once again and he scored a genuinely sensational goal, before claiming as assist late on.Harry Wilson had broken the deadlock from a Gareth Bale pass in the first half and, after the break, James sent a brilliant strike soaring into the top corner of the net from 20 yards.Finland were reduced to 10 men early on when Jere Uronen was sent off, but they showed admirable spirit in response to Daniel's goal and pulled one back via Teemu Pukki.With the game seemingly in the balance, James produced another moment of quality by supplying the cross from which Kieffer Moore headed the decisive goal.

The valuable 3-1 victory for Wales has crucially secured their promotion to the UEFA Nations League Group A.

Meanwhile, United captain Harry Maguire returned to England’s starting XI after missing the weekend game in Belgium due to suspension, and he kept a clean sheet in a 4-0 win over Iceland. The 27-year-old played a full match at Wembley Stadium as part of a back three alongside Kyle Walker and Eric Dier, with Declan Rice, Mason Mount and Phil Foden (two) scoring the goals. Our man almost scored himself, too, when a long-range shot was saved in the second half.Dean Henderson was an unused substitute for the UEFA Nations League match, yet the Academy graduate can consider the break a success after making his senior England debut last week.

Elsewhere, Scott McTominay played a full match as Scotland were beaten 1-0 by Israel in the UEFA Nations League Group B2 at Netanya Stadium.The United midfielder is deployed in defence by his international manager Steve Clarke and unfortunately he could not prevent Manor Solomon from scoring, after a charging run into the box.  Donny van de Beek was named on the bench as Netherlands faced Poland and the United midfielder made an entrance after 70 minutes, replacing his former Ajax team-mate Davy Klassen. The Dutch were trailing to a Kamil Jozwiak goal at the time of Donny's arrival, but they restored parity soon after thanks to a Memphis Depay penalty and went in front via Georginio Wijnaldum.

Finally, Academy midfielder Ethan Galbraith made his second appearance for Northern Ireland during a 1-1 draw against Romania in Belfast. The United youngster was named on the bench and made his entrance in the 79th minute.