The Welshman insists he "feels really good at the moment" despite being in and out of Ole Gunnar Solskjaer's line up at Old ... 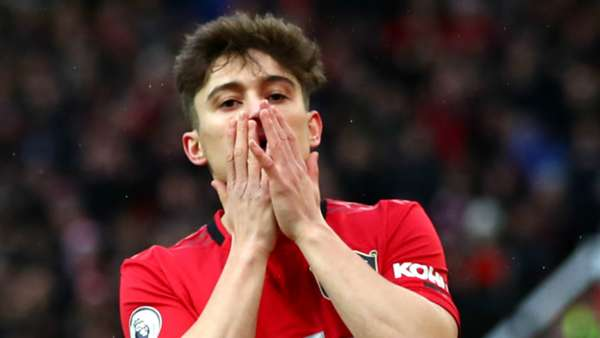 The Welshman insists he "feels really good at the moment" despite being in and out of Ole Gunnar Solskjaer's line up at Old Trafford.

Daniel James says he's "sticking in there" as he continues to battle for a regular spot at Manchester United.

James made a blistering start to life in Manchester, scoring three goals in his first four Premier League appearances, impressing with his blistering pace in the final third and direct style of play.

The 23-year-old was not able to sustain that form, however, as he embarked on a 32-game scoreless run which left supporters questioning Ole Gunnar Solskjaer's faith in the Welshman.

James' first season at Old Trafford was still deemed a success as he featured in a total of 46 matches during United's run to a third-place Premier League finish and three semi-finals, but he has fallen down the squad pecking order at the start of the 2020-21 campaign.

With the summer arrivals of Donny van de Beek and Edinson Cavani increasing competition for places in attacking positions, the ex-Swansea star has been restricted to just three cameos from the bench for the Red Devils in the top flight to date.

James had the opportunity to get some regular minutes under his belt with Wales during the international break, and scored a stunning goal in a 3-1 Nations' League win over Finland on Wednesday, but he insists he doesn't enjoy playing for his country more than his club at the moment.

"I wouldn't say it's a release," the mercurial winger told BBC Sport when discussing his work with the Dragons over the past week.

"Man United is my club and I love it there. Whether I am playing or not, I'm proud, as proud as I am to play for Wales.

"There are obviously times where I played a lot last season. I may not have played as much this season, but I am sticking in there and always in and around it.

"I feel really good at the moment. When I do play, I give my all. I bought into everything we wanted to do and thankfully I got that goal and assist."

Wale secured promotion to the top tier of the Nations' League by beating Finland, and James is looking forward to pitting his wits against the best teams on the continent in both that competition and next summer's European Championships.

"After we qualified for the Euros we wanted to make sure we made another achievement, we knew it would be tough coming into this group with some tough games," The United starlet added.

"Qualifying for the Euros was such a massive achievement and we've got that to look forward to.

"Having qualified it put us in a great position in this group to push on and see what we could do next.

"To compete with the best teams in Europe in League A is where we want to be. We're really looking forward to that."