Louis van Gaal was always keen to give opportunities to young players at Man Utd but many of them were unsuccessful at Old Trafford. Paddy... 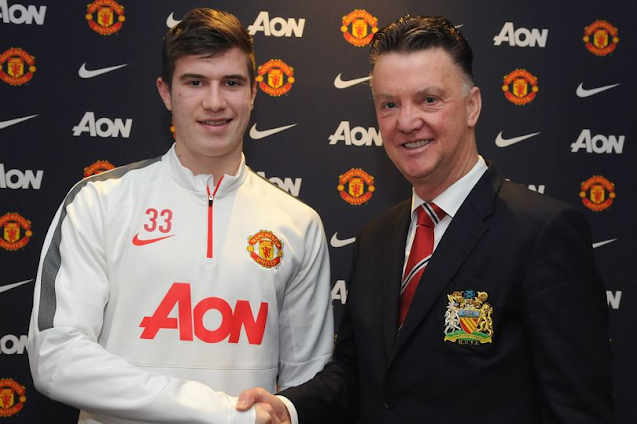 Louis van Gaal was always keen to give opportunities to young players at Man Utd but many of them were unsuccessful at Old Trafford.

Manchester United have always been keen to blood young players from their academy.

Ole Gunnar Solskjaer has done so in recent years, handing debuts to the likes of Mason Greenwood, Brandon Williams and Teden Mengi, while before him Jose Mourinho loved Scott McTominay and also gave Angel Gomes his first team bow.

But the most prolific in terms of leaning on the academy in the post Ferguson years at United was Louis van Gaal. In his two-season tenure, he handed 14 senior debuts to academy players and here they are, and what's become of them since:

Lingard was 21 by the time he finally appeared in the United first-team at wing-back Swansea in Van Gaal's first competitive game in charge against Swansea. He had performed encouragingly during the productive pre-season tour of the United States, scoring against Real Madrid and Liverpool, and was preferred over David Moyes favourite Adnan Januzaj.

Januzaj replaced the injured Lingard after 24 minutes, however, due to injury but Lingard has easily outlasted the Belgian at United, scoring in the FA Cup and League Cup final wins under Van Gaal and Jose Mourinho.

After a decent World Cup with England, Lingard has struggled at United and, although he's still a squad player under Solskjaer, his stock has dropped since a purple patch under Mourinho.

Blackett was so poor on loan at Birmingham in 2013-14 he was booed but Van Gaal, who insisted on having right and left-footed defenders in the centre of his back three.

Van Gaal therefore started Blackett in his first five league matches as manager, though United shipped eight goals - five of them at Leicester, where Blackett was dismissed. He overachieved just by playing for the first-team but still got a new contract. Blackett went to Reading in 2016 before moving on to Nottingham Forest in the summer.

Not the Chelsea one. Like Blackett, James was lucky just to get a kick for the United first-team. He made a goalscoring impact on the USA tour against the LA Galaxy but seemed out of his depth in the first team, appearing in that horrid 4-0 League Cup defeat to Dele Alli and MK Dons in 2014.

James is now at Doncaster Rovers, having had permanent spells at Wigan and Sunderland since leaving United in 2015.

Lasted 45 minutes against MK Dons and, like James, never appeared again. The Swiss has been nomadic since leaving United in July 2015, having spells at Barnsley, Saint Etienne, Porto, Nottingham Forest and Young Boys, all on loan from Celtic.

He then headed to Spain on a permanent deal to Valladolid.

The Brazilian is still contracted to United, but after making a major breakthrough under Solskjaer he became be surplus to requirements. He got a new contract but after the signing of Bruno Fernandes, his game-time started to diminish and he joined Lazio on a season-long loan in the summer.

Seems unlikely that he'll get back into the first team reckoning.

McNair was an unused substitute at MK Dons and started against West Ham in the absence of the suspended Blackett. He did not even have a Wikipedia entry at the time but produced a late goal-saving clearance to preserve 10-man United's 2-1 advantage and the next week nuzzled Romelu Lukaku. That was his peak.

McNair's limitations soon became patent and he never played for United again after Van Gaal was sacked. McNair is now at Middlesbrough and a key part of Neil Warnock's rebuild on Teeside.

Came on for 111 seconds and that was the extent of his first team involvement. Van Gaal illogically trialled Thorpe - a defender - in midfield in training sessions and converted McNair - a midfielder by trade - into a defender.

Thorpe was released in 2015, had a disastrous spell with Rotherham, earned promotion with Bolton in 2016-17 but then spent time with Indian Super League side ATK but hasn't had a club since.

A week after Axel Tuanzebe made the bench at Crystal Palace, Borthwick-Jackson went one better and came on against West Brom. The Flixton-born left-back impressed for a spell amid a defensive injury crisis, but after he succumbed to injury in the FA Cup at Shrewsbury, his days became numbered.

Borthwick-Jackson signed a four-year contract a week after Jose Mourinho's appointment but after poor loan spells at Wolves, Leeds, Scunthorpe and Tranmere, he eventually left United in the summer.

Now 23, he has joined Oldham, where he had a slightly better loan spell, on a permanent deal.

The Scot was on loan at Wigan for three months in 2015-16 but was then needed in the United defence. Love, 21 at the time, came into the team at the worst possible time. United players were dropping like flies and Love was thrown on at Sunderland to replace the injured Matteo Darmian. Sunderland won 2-1 and five days later Love lined up at Midtjylland, the nadir of Van Gaal's reign.

Love joined Sunderland in 2016 at the same time as McNair but left for Shrewsbury in the summer of 2019.

Riley was one of the standout reserve players at the time of his first-team promotion. He replaced Borthwick-Jackson at Shrewsbury and started three days later in the Europa League second leg against Midtjylland. Riley was named as a substitute for the weekend visit of Arsenal but did not figure in a matchday squad again.

He left United for Bradford but is now a regular in the Carlisle team.

There has hardly been a more stratospheric start to a United career than Rashford's. He only started his debut against Midtjylland because Anthony Martial withdrew with a hamstring injury and Will Keane pulled out at the last minute.

Rashford never looked back, scoring twice in that game and against Arsenal days later. He maintained his spot in the United side despite some inconsistent form during the Mourinho years.

Rashford is now a key figure for Solskjaer's side and England, a leader both on and off the pitch and has received widespread plaudits for his work helping children get school meals during lockdowns since the pandemic.

Like Thorpe and James Weir, Poole's sole cameo came in injury time. United had scored all five goals by the time Poole replaced Ander Herrera in the 5-1 comeback against Midtjylland.

The Welshman was released by United in June 2019 and joined MK Dons, where he remains.

Fosu-Mensah was once touted as the next big thing to come out of United's academy but in recent years he's been hit by a serious ACL injury, suffered while on loan at Fulham in the 2018/19 season.

He returned to the United side for the game at Crystal Palace post-lockdown last season, following a three-year absence. Considered a back-up player by Solskjaer at the moment.

Weir was arguably the United Under-21s' player of the year in 2015-16 and made the bench seven times for the first-team. His first call-up was for the 3-3 draw with Newcastle in January, but Weir had to wait over a month to cross the white line and when he did it was in the 95th minute.

He did not see United first team action after that, joining Hull in 2016 and then played for Bolton last season but is now without a club.