Man of the moment: Marcus Rashford’s signed soccer shirt to be auctioned in aid of food bank

He’s most definitely the man of the moment. And now every penny from an auction of his signed – and framed – football shirt will go to a foo... 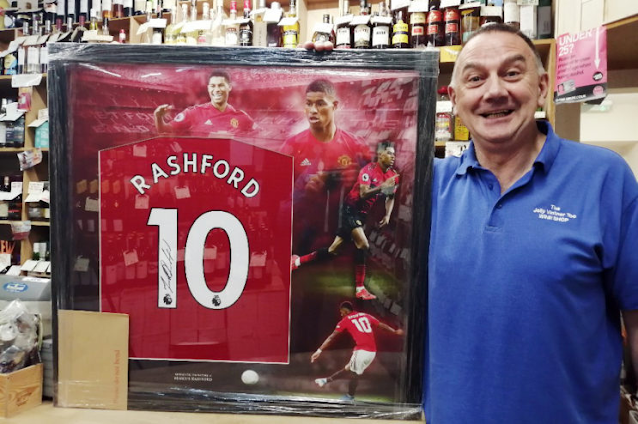 He’s most definitely the man of the moment.

And now every penny from an auction of his signed – and framed – football shirt will go to a food bank which has seen demand double during the summer.

We’re talking Marcus Rashford MBE, the England and Manchester United footballer, who has rarely been out of the headlines with his campaigning on child food poverty and other issues.

Jim Dawson, Owner and Director of The Jolly Vintner Too in Bournemouth, acquired the 23-year-old’s framed No.10 shirt from a customer, Terry Baker of A1 Sporting Speakers.

He’s now auctioning it to the highest bidder with all proceeds going to Southbourne Food Bank.

Jim, 62, said: “Since the start of the lockdown I’ve tried to give something back.

“I’ve felt very fortunate to have been able to stay open and keep trading while others around me have been forced to close.

“Since the beginning of April I’ve donated about £4,000 worth of foodstuffs to Southbourne Food Bank.

“I asked what sort of things they needed and they said items like sugar, tea, coffee, tinned rice, tinned fruit and canned meat and tuna.

“Terry mentioned three weeks or so ago that he had Marcus Rashford’s signed shirt.

“He’s very much the man of the moment who has held the government to account for food poverty.

“I felt there was an opportunity to raise some money for Southbourne Food Bank and so bartered with Terry for the shirt.

“It comes with a certificate of authenticity and I hope will raise at least £600 – and hopefully a lot more.

“I’m very aware that while I’ve had a crazy time in terms of deliveries and business, many others have not been so fortunate.”

The Reverend Peter Southcombe, of Immanuel Church, Southbourne, which hosts Southbourne Food Bank on behalf of Churches Together, said: “We’re extremely grateful for any contributions at a time of crisis for lots of families who didn’t see this coming.

“Southbourne may seem an affluent area but there is hidden poverty.

“Over the summer we saw demand double compared to the same time last year.

“I must pass on huge thanks to the community and businesses who have been so supportive to us.”

Jim opened The Jolly Vintner Too in 2006, initially in Iford before moving to its present location in Christchurch Road eight years ago.

It is now the only independent wine shop of its kind in Bournemouth.

He said: “At the height of the last lockdown we were doing up to 40 deliveries a day.

“Tom Bagnall, of Christchurch Angling Centre, has been helping with deliveries and also teaching me photography and video to help with the social media side of things.

“In many ways it’s been a crazy time for the business and that’s why I want to give something back.

“I really hope we can raise a lot of money and help out more people who are having such a difficult time.”

During shop hours the framed shirt will be in the window of The Jolly Vintner Too at 1099 Christchurch Rd, Bournemouth, BH7 6BQ.

Jim said: “If anyone wants to come and see it, have their picture taken from outside to feel part of it, then they’re very welcome.”