Manchester United midfielder Bruno Fernandes has added yet another individual award to his trophy cabinet after he was confirmed as the wi... 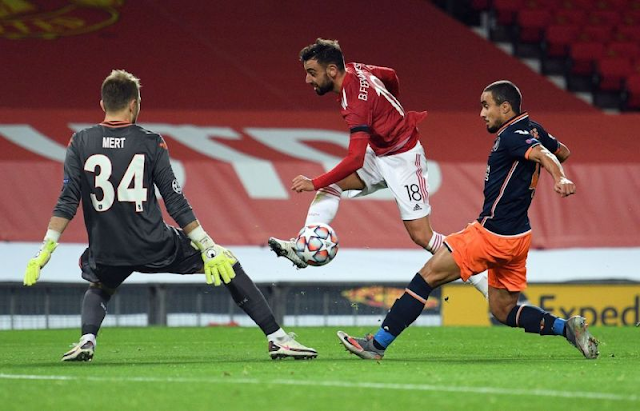 Manchester United midfielder Bruno Fernandes has added yet another individual award to his trophy cabinet after he was confirmed as the winner of the UEFA Champions League’s ‘Goal of the Week’ award for his rocket strike against Istanbul Basaksehir.

Fernandes, 26, joined United in January from Sporting Lisbon in a move which cost the Reds’ hierarchy £49.5m, as per Transfermarkt.

Since his arrival at Old Trafford less than 12-months ago, Fernandes has gone on to have an unrivalled impact on the Reds’ on-field fortunes.

United’s new 26-year-old has already been directly involved in a stunning 34 goals from just 35 matches in all competitions.

Fernandes has already proven that he can do it for United on both the domestic stage as well as the European one after bagging three goals and one assist in his side’s first four Champions League group stage matches this season.

The Portuguese midfielder’s latest contributions came during his side’s 4-1 thrashing over Istanbul Basaksehir earlier this week after the attacker put in a stunning performance.

Fernandes could have netted a first-half hat-trick but after shockingly gifting the Reds’ spot-kick to team-mate Marcus Rashford, the 26-year-old was forced to settle for a brace after being subbed off just after the break.

During Fernandes’ eye-catching mid-week performance, the midfielder scored an absolute rocket of a strike after a teasing oppotuntity presented itself from an Alex Telles’ corner.

United’s midfielder maestro rocketed the ball from the edge of the box into the top right corner of his opponent’s net to give his side an important lead.

Fernandes’ thunderbolt has been dubbed as the best goal of the week which sees the midfielder pick up yet another award, this time, the illustrious UEFA Champions League’s ‘Goal of the Week’ award.