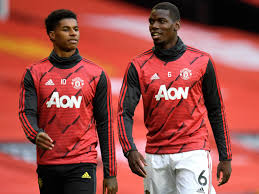 That’s according to research by the CIES Football Observatory, who delved into the development of every player from the Premier League, Spain’s La Liga, Italy’s Serie A, the German Bundesliga and France’s Ligue Un.

By the UEFA definition, which states that training clubs are those where players have been for at least three seasons between the ages of 15 and 21, the Reds have trained 24 players across those major leagues.

While that tally is fewer than Real Madrid (43) and Barcelona (32), who benefit from being able to blood youngsters in their B sides in Spain’s lower divisions, it’s one more than domestic rivals Arsenal and four ahead of Chelsea.

Eight of those 24 players have appeared for Ole Gunnar Solskjaer's side in 2020/21 so far – Tim Fosu-Mensah, Mason Greenwood, Dean Henderson, Jesse Lingard, Scott McTominay, Paul Pogba, Marcus Rashford and Axel Tuanzebe. Another two, Tahith Chong and Andreas Pereira, have played league fixtures for their loan clubs, Werder Bremen and Lazio respectively.
To be counted in the Football Observatory's study, a player must have either appeared in a domestic league game this season or have played matches in senior competitions during each of the previous two campaigns. By this definition, some of the young Reds who made their debuts last term have not been included, such as Brandon Williams - who made 17 Premier League appearances in 2019/20 - and Teden Mengi, Ethan Galbraith and Ethan Laird, who all played Europa League football.
Nine of the 24 players on the list are currently contracted to other Premier League clubs – Leicester City's Jonny Evans and Everton’s Michael Keane among them – while we also boast club-trained players in each of Europe’s other big five leagues, with Barcelona’s Gerard Pique and Juventus’s iconic forward Cristiano Ronaldo being two of the most famous names.
Ronaldo came through the youth system at Sporting in Portugal, but as he clocked up three years of training with the Reds before the age of 21, he qualifies under the aforementioned UEFA definition.

A further 11 players trained by United regularly play in the divisions ranked between sixth and 31st in Europe, including Federico Macheda (Panathinaikos) and Rafael da Silva (Istanbul Basaksehir).

The club's Head of Academy, Nick Cox, said the research proves that the aim of producing talented first-team footballers, whether they go on to represent for United or play elsewhere, is being achieved.

Cox told us: “These are great statistics that once again showcase the quality of players that the Academy is regularly producing.

“It is no secret that our main objective is to produce players ready to perform for the first team and the fact that we had eight players make their debuts throughout last season is testament to that.
“However, we also want all of the boys who come through our system to have long and successful careers elsewhere if they do not make it at Manchester United.

“It is clear to see from this study that there are a number of players thriving across the continent which is something that everyone in the Academy can be really proud of.”

10 CURRENT PLAYERS WHO WERE 'CLUB-TRAINED'

*Loaned out for the season

14 FORMER PLAYERS WHO WERE 'CLUB-TRAINED'