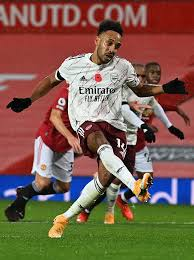 Aubameyang's goal at Old Trafford was his first Premier League strike since the opening day of the season and earned the Gunners a first win in three league matches.

Arsenal limited United to just one shot on target and looked the more likely of the two sides to break the deadlock.

The result means United are winless in four matches at home in the Premier League this season - their worst run since 1972.

Despite the away side's dominance, Arsenal's Bernd Leno was the first of the two keepers to be tested as an outstretched foot denied a driven effort from Mason Greenwood in the first half.

Arsenal's best chance of the opening period fell to Bukayo Saka but the 19-year-old headed over the bar after Willian had clipped the top of the bar a few minutes earlier.

The Gunners threatened again before Aubameyang's spot kick, as Alexandre Lacazette played in the Arsenal captain on the breakaway but the Gabonese forward's curled effort was a foot wide of De Gea's left post.

Referee Mike Dean pointed straight to the spot when Paul Pogba tripped Hector Bellerin in the box in the 69th minute and Aubameyang sent David De Gea the wrong way to score the winner.

United substitute Donny van de Beek saw a cross deflected onto the post in the closing stages but Arsenal held on to take all three points.