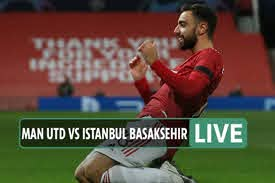 Bruno Fernandes and Marcus Rashford gave the Red Devils a comfortable lead after just over half an hour.

Deniz Turuc scored a cracking free-kick that was awarded thanks to goal-line technology before Daniel James bagged a fourth for the Red Devils.

Another night at Old Trafford, another Manchester United win.

Yet this one had none of the disappointment, good fortune and controversy that clouded Saturday evening’s victory over West Brom.

Instead, the Red Devils flew out of the traps this evening, eager to make amends for their Istanbul nightmare earlier in the month.

Bruno Fernandes revelled, naturally, and had the hosts 2-0 up within 20 minutes; his first a sensational half-volley, the second courtesy of a goalkeeping howler.

The Portuguese playmaker passed up the opportunity for a first half hat-trick, handing over a penalty to Marcus Rashford. The English forward made no mistake in scoring the spotkick he had won.

Dan James came off the bench to bag a confidence-boosting goal in injury time, and sealed the dominant victory that the English side’s performance in the first 30 minutes deserved.

Basaksehir were not without their chances, however, and Ole Gunnar Solskjaer’s team know that they will have to do better against a higher calibre of opposition if they hope to go far in the competition.

Deniz Turuc’s free-kick could have been more than a consolation had his teammates – Demba Ba, in particular – not passed up a number of decent opportunities.

United now need just one point from their final two games to qualify for the knockout stages, and given the difficulty of their group, they would have settled for that when the leagues were drawn.

Maybe, just maybe, this Manchester United season won’t be the underwhelming experience that so many expected.

Thanks for reading, we’ll be back with more Champions League action tomorrow night.

Neil Custis has been our man at Old Trafford tonight. Read his match report of Manchester United's 4-1 victory over Basaksehir, hot off the press.

“You saw the intensity straight away, the boys wanted to play. It’s a Champions League night at home at Old Trafford and you’d expect them to enjoy themselves.

“We created some great chances and scored some very nice goals. It was very pleasing.

“[Edinson Cavani and Donny Van de Beek] are getting used to how we want them to play.

“Donny can play in different positions while Edinson is a good old-fashioned number nine and we haven’t had that for a little while. I was very also happy with how Anthony [Martial] played off the left hand side again.

“When you are 3-0 up and you take your foot off the pedal a little bit, you give them something to play for. They enjoyed the second half more, but you’re happy with a 4-1 win in the Champions League.

“It’s a back problem for Victor [Lindelof] and an ankle problem for Aaron [Wan-Bissaka] so there was no point taking any more chances with. Hopefully, they will be ready for the weekend.

“We need one more point to go through, but of course we want to be top of the group – that’s our aim – so we’ll take one game at a time.”

Manchester United captain Harry Maguire is a happy man after his side eased to victory – eventually.