THIS is what Manchester United can do, in form and in the mood. Can we see this every week? Their fans will ask. Never mind it was just Is... 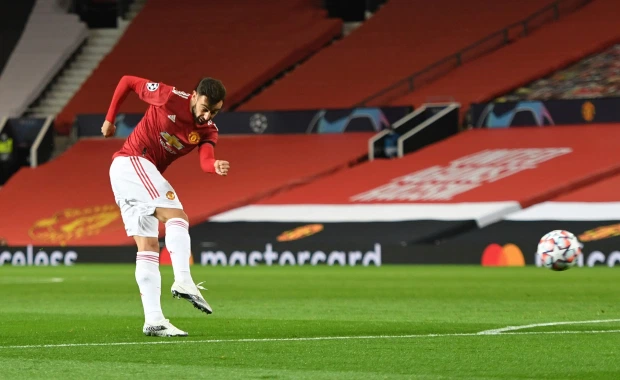 THIS is what Manchester United can do, in form and in the mood. Can we see this every week? Their fans will ask.

This is a side that broke the monopoly of the big three in Turkey last season to lift the title.

A side that beat United last time out, proving that if your just off your game in the Champions League you will come unstuck, the standard is that high.

Having gifted two goals in that 2-1 defeat in the Turkish capital, manager Ole Solskjaer emphasised the need for full effort and concentration.

He got that and more with Bruno Fernandes at the centre of it all. Two goals, the first a thunderbolt from 20-yards, he ran the show.

It is on these occasions that he plays with a smile on his face. When he can take matters into his own hands, drift here and there and constantly get on the ball.

Of course the sort of space he enjoyed in this game is not often afforded in the Premier League by any side. But an early goal can always open things up.

It is why Sir Alex Ferguson’s teams used to go straight for the throat from the kick-off against teams domestically in particular.

Non of this sizing each other up. Get a goal, ruin their best-laid plans then finish the game off.

United did that last night with a 3-0 advantage by the break and three more Group H points wrapped up.

The opener on seven minutes was the highlight. You could hear the crack of the ball hitting the net as Fernandes struck.

Alex Telles took a corner and defender Alexandru Epureanu headed to just outside the box. Fernandes, unmarked, had hung back there hoping for this very scenario.

So he was shaped up and ready to strike as the ball flew his way, releasing a scorching volley into the roof of the net.

The problem under Solskjaer too often is a failure to capitalise fully when on top. Not last night, the foot stayed on the pedal with the second coming in the 19th minute.

Telles supplied the initial ball again with a cross from the left and goalkeeper Mert Gunok let the it slip through his hands for Fernandes to slot home.

He had got himself into a striker’s position, anticipating the possibilities and the set up was allowing him to.

Solskjaer was playing Marcus Rashford wide right and Anthony Martial was shifted from the central number nine position to the left.

Edinson Cavani made his full debut down the middle with his first start since March.

While the Uruguayan was not getting many touches of the ball the Turkish defence seemed terrified by the 33-year-old’s reputation.

So he ran this way and that to open up spaces for others and allow Fernandes to come from deep. That is five in three games for him and only one of those from the spot.

The third last night, on 35 minuites, did, however, come from the spot. Well it wouldn’t be United without a penalty.

Rashford’s pace won it.  Racing from the halfway line onto a long ball from Lindelof he stepped actross Boli Bolingol who bundled him over.

The chance for a first half hat-trick for Fernandes? But no, Rashford was taking it and with a stuttering run-up he sent the goalkeeper the wrong way and slotted the ball into the bottom right hand corner.

The game won Solskjaer was in the enviable position amongst Premier League managers right now of being able to give key players a breather.

A triple substitution meant Fernandes, Rashford and Aaron Wan-Bissaka could sit out the final half hour ahead of Sunday’s tricky trip to fifth placed Southampton.

Basaksehir did get one back in the 75th minute with David de Gea bizarrely diving behind his ling to stop a Deniz Tunic free-kick. The ball clearly over the line when he made his save.

Edin Visca would then rattle the bar too, but United regained their composure to see the game out, with Mason Greenwood setting up Daniel James for an injury time fourth.

Victory last night leaves United on top of Group H with nine points and qualification still not guaranteed with PSG the next visitors then a final day trip to RB Leipzig.

Beat the Saints and they will have six more points than at the same stage last season when they finished third and still with a game in hand on many above them.

There is also an EFL quarter-final against Everton to look forward to. It is not always doom and gloom around Old Trafford.