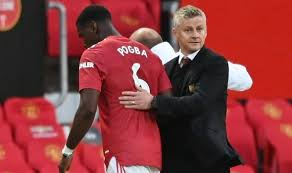 Manchester United boss Ole Gunnar Solskjaer insists Paul Pogba still has a crucial role to play, despite admitting the France star is unhappy with his lack of action. United's £89million record signing has started just one of his side's last four matches ahead of Saturday's return to Premier League action against West Brom.

That has left Pogba with restricted opportunities - and France boss Didier Deschamps said during the international break that the 27-year-old was growing disillusioned with the situation.

Pogba all started all three of France's game during the break as Deschamps' side beat Sweden and Portugal in the Nations League after losing to Finland in a friendly.

His contrasting struggle to nail down a place in the United side has led to increased speculation he could leave the club in the summer, having been frequently linked with a move to Real Madrid.

However, Solskjaer insists that Pogba's ability to play a number of positions means he will still have a key role to play in the season ahead.

And the United manager pointed out that Pogba is still striving to get back to his best after contracting coronavirus recently.

"I spoke to Paul today about it," said Solskjaer ahead of Saturday's Old Trafford clash against West Brom. "Of course he’s not been happy when he’s not playing, and not playing really well.

"He’s not been happy with his performances. He plays in the same position for France and he does for us, so that’s not a different scenario.