LIVERPOOL are joining Manchester United in the race for Dayot Upamecano after Jurgen Klopp reportedly identified the RB Leipzig star as his ... 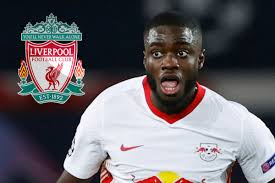 LIVERPOOL are joining Manchester United in the race for Dayot Upamecano after Jurgen Klopp reportedly identified the RB Leipzig star as his number one target.
A serious injury to Joe Gomez while on England duty has sparked a crisis in the Reds defence, which the Premier League holders are keen to solve in January.

But they will face intense competition with rivals United to bring in Upamecano, one of the highest-rated centre-backs in Europe, who has long been monitored by the Manchester side.

They remained interested even after the defender endured a difficult night during United's 5-0 win against Leipzig in the Champions League.

The Athletic report that the 22-year-old is topping Klopp's wish list after Gomez's injury left him likely to be sidelined alongside Virgil Van Dijk.

Liverpool reportedly planned to bring Upamecano in next summer but the scale of their problems means the move may now be accelerated.

The Frenchman is believed to have a clause in his contract which will allow him to leave for £38million.

It will be the second time in recent history that Liverpool will be diving in for a Leipzig star, following their long-running pursuit of Naby Keita.

They had to pay a 48m release clause to land the midfielder back in 2017, with an agreement in place meaning he stayed at the German club for another year.

If they cannot secure Upamecano, the Merseyside club will also be looking at Brighton's Ben White, Ozan Kabak from Schalke or Torino's Gleison Bremer.

Liverpool face competition not just from Man United but also from Bayern Munich if they are to bring in their top target.

The Champions League holders are believed to be looking at a long-term replacement for Jerome Boateng.

Following a number of unfortunate incidents, Liverpool look set to restart their Premier League campaign at home against pace setters Leicester with a makeshift defence.

Along with Gomez's absence, Van Dijk has been ruled out for some time after a reckless tackle by Jordan Pickford in last month's Merseyside derby.

Fabinho is still recovering from his hamstring problems while Joel Matip's sketchy fitness record will be a cause for concern.