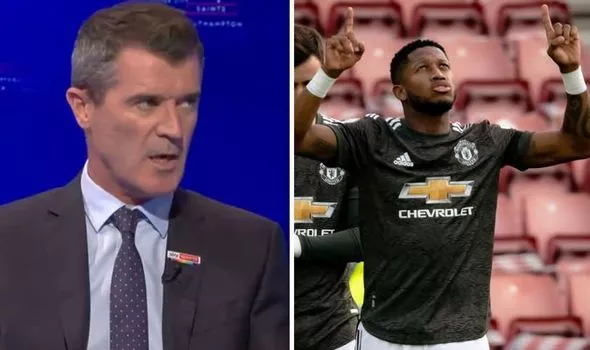 Manchester United struggled on their visit to the south coast to play Southampton.

Manchester United legend Roy Keane believes today's clash at Southampton strengthened his view that Fred is not good enough to play for the Red Devils. Fred has started six of United's Premier League games so far this season, as well as three of the four Champions League group matches. But Keane has seen enough of the Brazil international to deem him not at the level to play for his former side.

United trailed 2-0 at half time at St Mary's following a Jan Bednarek header and a James Ward-Prowse free kick.

Ward-Prowse continues to establish himself as one of Europe's best free-kick takers, having now scored three already this season.

But Keane says there is no way Fred should have given the foul away in the first place.

United goalkeeper David de Gea got a hand to the strike but Keane says Fred should take the brunt of the blame.

"Well I'd be more critical of Fred, I think Fred giving away the free kick," Keane said on Sky Sports.

"De Gea, again I still don't expect my goalkeeper to be beaten from there, I really don't.

"Fantastic set-piece, the pace he gets on it and the accuracy, he's certainly one of the best in Europe at the moment with that type of delivery.

"I'd be disappointed with my goalkeeper but I'd be more annoyed with Fred for being really lazy, sloppy.

Fred joined United from Shakhtar Donetsk in 2018 for a fee of around £52million.

But former Republic of Ireland midfielder Keane says he has never been a fan of the 27-year-old.

"But from United's point of view, they would have said before the game 'don't be giving any daft free kicks away'.

"The corners can happen obviously and you take that, but the free kick, if you look at Fred closely, and I've been criticising Fred for years and my eyes don't lie to me. Really poor decision, really lazy."