A FIRST HALF blitz ensured Manchester United blew Istanbul Basaksehir away to claim the points in the Champions League. It should have bee... 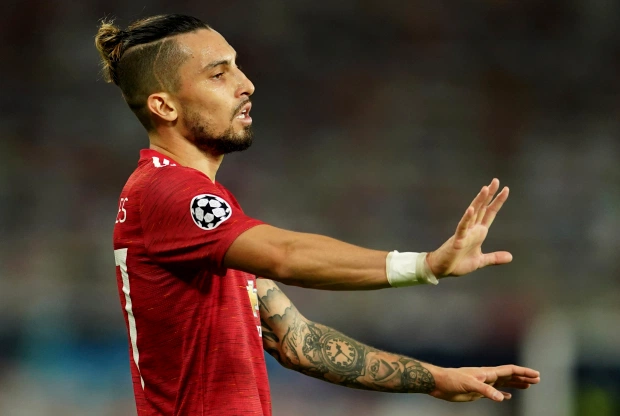 A FIRST HALF blitz ensured Manchester United blew Istanbul Basaksehir away to claim the points in the Champions League.

It should have been game over after just 35 minutes after a Bruno Fernandes brace and a Marcus Rashford penalty fired them into a 3-0 lead.

But the visitors refused to give up and caused several worrying moments in the second period, especially after Deniz Turuc pulled one back with a free-kick.

Fortunately substitute Daniel James eased any fears late on to cap off a 4-1 win.

Rarely called into action due to the poor finishing of Istanbul Basaksehir but will feel he could have done better to stop the free-kick which denied him his clean sheet.

A harsher critic might think he could have gotten across quicker to stop the effort from crossing the line.

Did what was expected and got up and down the flank well.

Perhaps he was struggling as he went straight down the tunnel looking unhappy when taken off - but fingers-crossed it is nothing serious.

Rarely struggled defensively and produced a superb pass for Rashford to race clear and win a penalty for United - which the forward coolly dispatched.

Landed awkwardly just before half time, and given his recent back issues and the 3-0 lead, was wisely replaced by Axel Tuanzebe at the break.

Allowed Demba Ba to get away from him too easily in the first half when defending a free-kick, but the ex-Newcastle man should have done better than head wide.

It’s moments like that which still has some doubting the £85m defender. Made amends moments before the break with a block to deny the same player six yards out.

He and Tuanzebe did not look comfortable together in the second half leading to a couple of panicky moments.

Booked for time-wasting late on.

Won and then took the corner that led to Fernandes’ opener before providing the cross for the second.

Getting better with each game and offers United even more threat going forwards - his big test will come when he comes up against an attacker who possesses the same danger.

Linked up well with Fred to sit in whenever the Brazilian pressed to offer protection to the back four and rarely gave the ball away all night.

Made a good sliding challenge first half to clear the danger just as an attacker was waiting to pull the trigger.

Neither he nor Fred still look capable of being that midfield man who can get it out wide to the wingers quickly to get them in those one-on-one situations that fans love to see.

If they can get someone alongside him who can do that then the Dutchman will become a key man for the Red Devils.

That said, he did produce a brilliantly-weighted throughball to set Greenwood free to tee-up James for the fourth.

Pressed higher than usual to win back the ball and regain possession for his team, with Van de Beek dropping to cover.

Still needs to be a bit more adventurous, as despite their early lead, he tended to continue playing square-balls instead of trying to carve open the opposition.

Continues to get better and better and he is undoubtedly United’s talisman under Solskjaer.

His first one was an effort Paul Scholes would have been proud of with a first-time half-volley from 20 yards and he showed a poacher’s instinct to tap home his second.

Passed up the opportunity for a hat-trick by generously handing the penalty over to Rashford.

He has now been involved in 34 goals in 35 games since his arrival in January and without question he has been the club’s best signing for years.

Showed great skill and footwork inside two minutes to dance through the defence for the first opportunity of the game and had one ruled out soon after for offside after a VAR check.

That set the tone for the rest of the night, and he got his name on the scoresheet with an ice-cold finish from the spot for his eighth of the season.

Started on the left instead of centrally to make room for Cavani and was up against former United defender Rafael.

Showed flashes of threat but was outshone by the rest of his attacking team-mates this evening.

Finally given a start by Solskjaer and did not disappoint.

Great movement to put off the goalkeeper and force him into a mistake for United’s second, Cavani never stopped running and chasing all night.

Looked desperate for a goal, and you had to feel for him when Greenwood opted to go it alone instead of playing it across for the veteran so he could get a goal for his efforts.

Focal point of the attack and excellent with his back to goal and bringing others into play - to-notch work-rate.

Booked within ten minutes of coming on and that rules him out of the PSG game next week.

He and Maguire did not appear to be on the same wavelength at times, resulting in some nervy moments.

Given half an hour to impress in place of Rashford but was unfortunate that the trio of changes that led to his introduction took the intensity out of United’s play.

Still showing a lack of confidence to run direct at the opposition, like he shows for Wales, but got a much needed boost by grabbing the fourth after showing great desire to get into a scoring position.

Defended well once on and did not allow the visitors much of a sniff down their left flank.

Should have squared it for Cavani within seconds of coming on but went for glory himself.

Fortunately spotted James in the dying seconds to roll him in for the fourth.

Introduced to shore up the team as the visitors continued to push on late on and helped to shore things up.