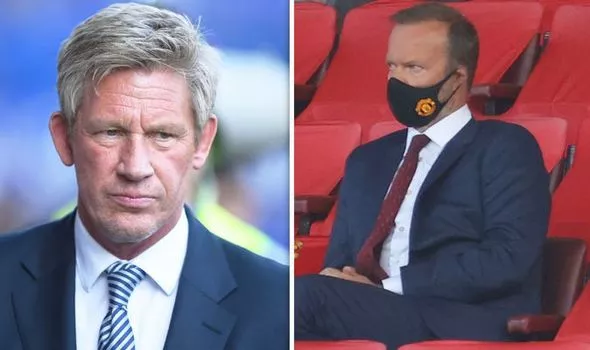 Manchester United are linked with appointing Everton chief Marcel Brands as their first director of football.

Manchester United are lining up a move to appoint Marcel Brands as their director of football, according to reports. Brands currently occupies the role at Everton, where he has been since 2018. The Dutchman has helped bring a number of high-profile players to Goodison Park.

United have long been linked with appointing a director of football ever since the departure of David Gill as chief executive in 2013, which coincided with the retirement of former manager Sir Alex Ferguson.

Executive vice-chairman Ed Woodward is currently in charge of transfer business but has been heavily criticised during his tenure.

So United chiefs may finally bite the bullet and appoint a director of football.

The Sun say Brands is a top candidate for the role, with his contract at Everton expiring at the end of this season.

The report says the appointment could lead to the departure of Woodward at Old Trafford.

United's summer business was heavily criticised after they failed in their pursuit to sign Borussia Dortmund star Jadon Sancho.

Woodward has often been lambasted by former United players for the length of time it takes the club to complete a signing.

And The Sun say the Red Devils are now planning a new structure, with Brands at the centre of their plans.

Serie A side Roma are also named as a club interested in appointing the 58-year-old.

Brands spent the entirety of his playing career throughout the 1980s and 1990s in Holland before becoming director of football at Dutch side RKC Waalwijk in 1998.

He then had spells at AZ Alkmaar and PSV Eindhoven before moving to Everton two years ago.

Friends of Brands believe he would find it hard to say no to United if they came calling.

However, Ole Gunnar Solskjaer's side could find themselves back in the bottom half following the remainder of the weekend's action.

Bruno Fernandes' penalty was enough to win a controversial encounter against the winless Baggies.

United host Istanbul Basaksehir in the Champions League on Tuesday before visiting the impressive Southampton in the Premier League next Sunday.