Things have not worked out so far for Donny van de Beek at Manchester United following his £34million summer transfer from Ajax. Juventus ar... 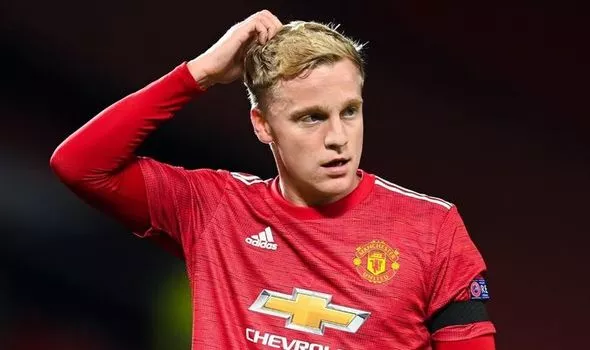 Things have not worked out so far for Donny van de Beek at Manchester United following his £34million summer transfer from Ajax.

Juventus are reportedly weighing up an offer for Manchester United new boy Donny van de Beek, according to reports in Italy. The Serie A giants are said to be considering a loan plus option to buy offer for the Dutchman, while a potential swap deal has also been mentioned.

Van de Beek has only been a United player for a matter of months but things are already looking bleak for the midfielder at Old Trafford.

Ole Gunnar Solskjaer does not seem to be a fan of Van de Beek, who is yet to start in the Premier League for the Red Devils.

The United boss remains insistent that Van de Beek still has a big part to play this season, despite his limited involvement.

His agent Sjaak Swart has already taken aim at Solskjaer, after Van de Beek was subbed on for the final few minutes of the 3-2 win at Brighton in September.

“A substitute, I don’t like it at all," Swart told VoetbalPrimeur. “I couldn’t do it myself, substituting in with four minutes left to play. Then you’d better let me sit down."

While Van de Beek will be determined to prove his worth at United, it appears he may have a decision to make next summer.

According to Italian outlet Calciomercato, Juventus are set to move for the 23-year-old next summer.

The report claims that Old Lady will attempt an initial loan with a view for a permanent deal at around €35milllion (£31m).

Alternatively, a swap deal is an avenue Juventus are prepared to explore given the respectable relationship between the two clubs.

While a lot can happen between now and the end of the season, Van de Beek's focus will be centred around the European Championships at the end of the campaign.

Given it will be his first international tournament, he will not want any distractions heading into the competition.

Calciomercato also claim that Inter Milan were in contention to sign him before he completed his move to United.

However, former Chelsea boss Antonio Conte personally ruled against the signing, as he wanted more experienced players at the San Siro.

Van de Beek impressed in midweek for United, in their 4-1 win over Istanbul Basaksehir.

He complimented man of the match Bruno Fernandes nicely, in a slightly deeper midfielder role.

The Holland international made it clear he enjoyed the role as he looks to build on a fine performance.

“It worked really well,” Van de Beek told MUTV. “Some games I play No.10 and sometimes the coach needs me in the control position.

"That is fine for me because before, when I played at Ajax, I was playing in those positions, so it is okay.”