ANDREW COLE says it is time this Manchester United team hit back at those revelling in their demise. Time to ram the taunts back down their ... 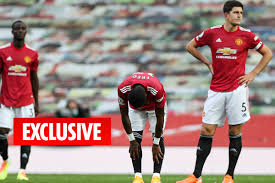 ANDREW COLE says it is time this Manchester United team hit back at those revelling in their demise.

Time to ram the taunts back down their detractors’ throats and show they can be winners again.

When he was at the club, Treble-winner Cole knew everyone outside Old Trafford wanted them to fail.

But that only made them stronger — and now Cole, 49, wants to see the same happen to Ole Gunnar Solskjaer’s United.

Cole said: “The club is about being under pressure and scrutiny consistently. Success breeds contempt and, when things are not going well, people want to jump on the bandwagon and talk about your lack of success.

“You have got to use that and get that siege mentality. And when you walk out there, believe in each other and say to yourselves, ‘This is what we are going to do, it is about us and what we can achieve’.

“The players have to get their heads down and become a unit.”

One of the many criticisms aimed at the current crop is that there are no leaders.

For Cole, instead of the players looking round for one, they need to take it upon themselves to be that person, every one of them.

He said: “In my day we were all captains in our own right and you had to lead your own ship.

“When we crossed that white line and looked at each other we knew we all wanted to win. In fact, we had some teams beat when we were in the tunnel.”

The us-against-the-world mentality that Sir Alex Ferguson forged drove his team to 13 Premier League titles and that memorable Treble in 1999.

Yet Cole never did quite get the animosity towards Manchester United.

Or the glee that greeted their  failings, like on the final day in 1995 when Cole himself was denied time and again by West Ham goalkeeper Ludek Miklosko and the title went to Blackburn.

Now delight grows with every season the club fails to get back to the very top.

Harry Maguire summed it up after Saturday’s 3-1 win at Everton.

He said: “People don’t want us to do well. Why? Probably because of the success we’ve had in the past.”

Cole remembers moving from a side much loved around the country in Newcastle to a completely different environment when he travelled away with Manchester United.

Cole said: “At first I did not understand why  people disliked Manchester United so much. I still don’t.

“Every team wants to win the big prizes. Why dislike the team that wants to do that season in, season out?

“But I suppose success does that. If you are successful, people seem to dislike you.

“Success seems to be frowned upon, questioned, scrutinised. Then people want to chip away at you if you make mistakes.”

Ferguson described West Ham’s performance that day in 1995 as an “obscene” effort. Recognising that a team with nothing to play for were simply desperate to stop  United.

It is something the club still have to live with even if they have not been relevant in terms of a title chase since 2013.

Cole said: “Being at United at times is not easy. Even if the club have not won the league for seven years, every opponent still raises their game against you.

“You have to match that. When I was at Manchester United the players understood what the club was about, that you always had to prove yourself.

“This team has to find that consistency. They go to Paris Saint-Germain and get an unbelievable result and then come back to the league and not play well.

"You are just not sure what team is going to turn up. Once they get that consistency it will breed confidence.”

Only now in writing his autobiography has he had the chance to properly look back on all he achieved.

He said: “I never enjoyed it as much as I should have done. The mentality when we won a trophy was, ‘Right, what can we win next?’.”

A mentality that served him and Manchester United very well.

IT WOULD HAVE BEEN TOO VARD

SIR ALEX FERGUSON would have subbed Andrew Cole after 20 minutes if he played like modern-day strikers.

All that possession, dropping deep and build-up play? Fergie would not have put up with it. Just get in the box and score.

Manchester United legend Cole, 49, said: “The game has evolved so much and people want to play a certain way.

“I was watching a game with a mate the other day and I said to him ‘If I was playing like that, the boss would have hooked me after 20 minutes’.

“Centre-forwards just don’t seem to make runs in behind any more and stretch the game. People are able to talk about ‘high lines’ because nobody wants to run in behind.

“Even Harry Kane is dropping deep. It is all about weaving patterns and trying to get in that way.”

There is one exception and at 33, he is currently the Premier League’s joint top scorer with eight goals, while his team are topping the table — Leicester’s Jamie Vardy.

Cole said: “I just don’t know how he has kept his pace at his age.

“They say you lose a yard as you get older but he seems to have gained one and that is his biggest strength. Centre-halves do not like someone who has that pace and Leicester play to his strengths.

“He is scoring, running in behind and continuing to terrorise teams.”

While many of the Prem’s exhausted players drag themselves off for internationals, Vardy will be able to recharge his batteries over the next fortnight.

It was a decision Cole made too, frustrated, like Vardy, at getting call-ups but not enough game time.

He added: “He has done what he thinks is right for him and his family and is being proved right.”