MANCHESTER UNITED have been warned by Eric Bailly's agency that the defender may need to 'assess' his future if his current si...

MANCHESTER UNITED have been warned by Eric Bailly's agency that the defender may need to 'assess' his future if his current situation does not improve.

The defender is out of favour at the club and has only appeared four times in all competitions this season.

He has been displaced in favour of manager Ole Gunner Solskjaer's preferred partnership of Harry Maguire and Victor Lindelof, much to the annoyance of Promoesport, the agency which represent the 26-year-old.

Head of the company Graziano Battistini told Calciomercato: "The experience with the Red Devils depends, as always, on luck, who you meet, on the opportunities.

"If he has the right chances, for me he can be an important player to solve some problems of the team.

"If all this does not happen, it is clear that the situation will need to be assessed, but now it is too early to say certain things.

"My Spanish partners who manage him are cautious in all respects, but the boy is very focused on Manchester United."

An injury has made Bailly miss the last few games but the club are hopeful he will return by the end of the international break.

But games were few and far between even when the Ghanaian was fit.

His lack of appearances follows reports from the summer that United had offered him to AC Milan - but the Italians were not interested.

Maguire and Lindelof were blasted by critics when Crystal Palace ran out winners at Old Trafford back in September.

The defence also fell apart when Tottenham arrived in Manchester and hit Solskjaer's side for six.

And there was the capitulation in Istanbul which left Man United's defence as the laughing stock around Europe. 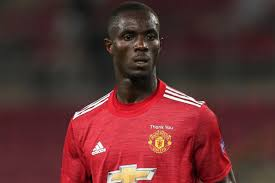