In the 2020 summer transfer window, Manchester United surpassed £1bn spent on players since Sir Alex Ferguson retired in 2013. A comprehen... 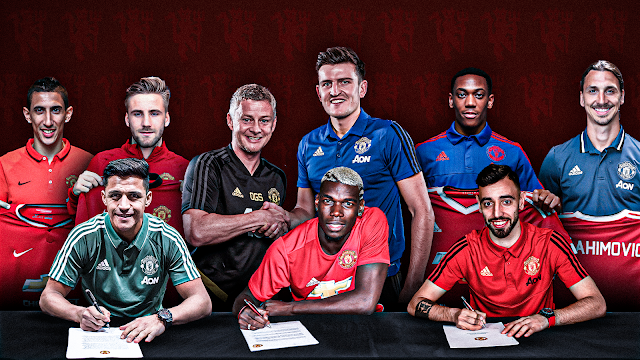 A comprehensive look at the money spent since Sir Alex Ferguson left Manchester United; which manager fared best? Should Paul Pogba be sold? And what exactly is the 'Manchester United way' in the transfer market?

The honours they have to show for it? An FA Cup, a League Cup, and a Europa League. So why hasn’t money spent translated into more success?

On this Pitch to Post Podcast special, we take an in-depth look at Manchester United AD - that’s After Dominance - and dissect their transfer business post Fergie.

Four managers. 36 signings. From Moyes to Ole, Fellaini to Cavani.

"The recruitment was not great. There were holes within the squad he inherited - Sir Alex left, David Gill left, and Ed Woodward came in for his first transfer window. They tried to get Toni Kroos, they tried to get Cesc Fabregas, they tried to get Gareth Bale. What did they end up with? Marouane Fellaini. And that tells you everything.

"That was symptomatic of the next seven years, they were not going to be Galacticos; it was graft, grit and grinding out results.

"Van Gaal was appointed before the World Cup, so there was a lot of excitement in watching his Netherlands side in Brazil in 2014.

"He brought in a few players who performed well at that World Cup - Daley Blind, Marcos Rojo, Bastian Schweinsteiger a year later - but there were three big, expensive flops, notably (Angel) Di Maria for £67.5m, (Memphis) Depay for £30.6m and Morgan Schneiderlin for £31.5m.

"United finished fourth in 2014/15, getting back into the Champions League, but then finished fifth the next season, and despite winning the FA Cup, it paved the way for Jose.

"Interestingly, Van Gaal was recently scathing about United's transfer policy during his two years there - he said he inherited an ageing squad - which he did address in signing the likes of Luke Shaw, Martial.

"There was some sympathy for Van Gaal when he got sacked, we all knew it was coming before the FA Cup final win over Palace in 2016, as he sort of rolled out the red carpet for Jose Mourinho, but the £250m he spent did not bring the hierarchy what they needed. Di Maria and Depay were really the two that let him down in a transfer sense."

"It was like: boom! Here comes the guy we all wanted, the antidote to Pep Guardiola, the guy that is going to grab United by the coattails and make them into title challengers again.

"What does he do? He breaks the world transfer record for Paul Pogba. He then brings in Henrikh Mkhitaryan, then Victor Lindelof, and it looks as though things are changing.

"But again, it's a bit like quicksand at United, you think you are getting somewhere and it sucks you down. Jose will tell you about the second-place finish, the Europa League, the League Cup, that is the majority of their success over the last seven years.

"His transfers were OK - there are a few grenades he has left in terms of the likes of Diogo Dalot, Eric Bailly, and maybe the fact that Lindelof is not the linchpin centre-back you would want at United. But there was a lot of excitement, a lot of money spent, and you wonder: what was it all about?

"In the second window, there was not quite as much thought put into transfers, similar to Ole's first and second year."

"It's hard to deny that Ole has not been given money to spend at Old Trafford, before this season in particular. £80m on Harry Maguire, £50m on Wan-Bissaka, £67m on Bruno Fernandes - these are not sums to be sniffed at.

"Of course, he was not as fortunate in the last summer window - but before then the transfer policy seemed clear and functional. Young players with character were brought in, they seemingly got their targets last year, but the plot seems to have been lost this year.

"They missed out on Erling Haaland, then Jadon Sancho, and they do not sign a defensive partner for Harry Maguire. Odion Ighalo worked well during what I would call a novelty period last season, where United were battling on several fronts, but it's been a stint of two halves transfer-wise for Ole, the second not quite as fruitful as the first.

"I wonder whether Ole, more than the managers that went before him, will actually be judged on the young players he has brought through. Yes it was Van Gaal that brought in Marcus Rashford, and Jose brought in Scott McTominay, but he has made them both better players, and brought in Mason Greenwood and Brandon Williams - so I wonder if that is where he will also be judged."

Which manager navigated transfers the best?

"Pound for pound you might even say Moyes! United got six years out of Fellaini and Mata is still going!

"But in all seriousness, all have had their expensive flops - but I will actually go with Ole. It is clear the fact they did not sign Sancho is not necessarily his fault - he has utilised Bruno in a fantastic way, Maguire was looking a good purchase as skipper before this season at least, and I think he can return to that form - and the jury's out on the rest. Wan-Bissaka's form has been questionable in recent weeks but before that, he looked a good signing.

"On balance, looking at all the managers, that's probably as good as you're going to get."

"Jose would tell you it was Jose. If it is 'show us your medals' time, with your resources, Jose would say he has achieved more than anyone else. But if you are talking about transfers who worked, you would probably say Ole. But it is also a kind of 'wait and see'."