Neither team landed a knockout blow in Man United and Manchester City's 2-2 draw in the WSL. Both sides were keen to play down the loo... 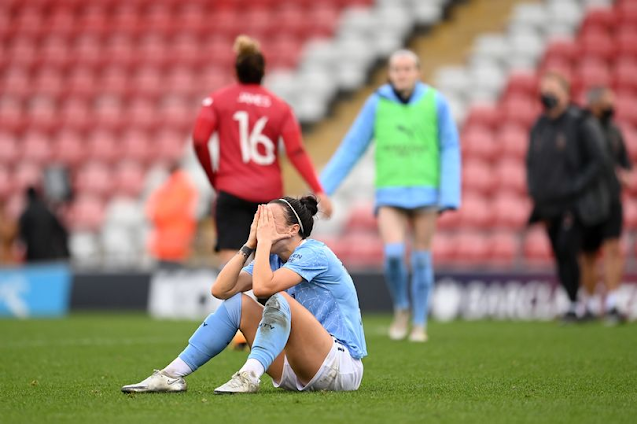 Neither team landed a knockout blow in Man United and Manchester City's 2-2 draw in the WSL.

Both sides were keen to play down the look of the Women's Super League table before this Manchester derby, with Manchester United top and five points clear of City.

By full time, it was clear to see why United have hauled themselves to the top of the league, as a gritty second half fight-back earned them an unlikely point against their City rivals.

United's aim has always been to break into the established top three of City, Chelsea and Arsenal. After playing all three at home in their opening seven games, with two draws and a win, Casey Stoney's side showed their credentials for reaching that goal by the end of the season.

But after 45 minutes, it looked certain that City were set to hand United their first defeat of the season, with a first half display that saw them score two goals and miss a hatful of other good chances. Gareth Taylor's side showed why they have won a cup already this season, and put eight past Bristol City in their last outing, but also why they aren't challenging at the top just yet. 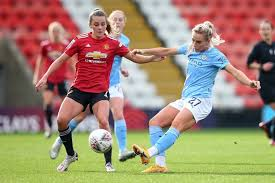 It was a lively start from both sides, as would be expected by the two teams with the most efforts on goal so far this season. Georgia Stanway, playing out on the left, took advantage of some hesitant defending to keep the ball in on the byline, but opted to shoot when there were blue shirts better placed in the centre. Up the other end, and Ella Toone's effort sailed just wide of the post.

But as soon as City took the lead - Chloe Kelly hooking home from a corner as United were hesitant to clear - the momentum was with the visitors.

Stanway had the beating of Ona Batlle time after time, with regular shouts of 'you've got her, Georgia' coming from midfield every time the no.11 was advancing on the United fullback. It was not just on the pitch where City were making their voices heard, their substitutes and backroom staff had given their team a noisy welcome onto the pitch, and were noticeably more vocal than the home contingent.

Casey Stoney said before the match that she was looking for a response from her players, to make sure last weekend's win over Arsenal wasn't a one-off, insisting it would only be a good result if they could back it up against City. Stoney was trying to push her players on, but they were struggling to even get out of their own half as City were clearly more up for the occasion. Even after missed chances for Demi Stokes, Sam Mewis and Stanway again, it was met with rapturous applause from the away substitutes.

It was noticeable in the warm ups that City were focusing on short, sharp passing, with United more direct in their practice game, looking to play between the lines or over the top. On the basis of the first half hour, City's approach was the only one that was working.

But while the score remained at 1-0, United were always in with a chance of getting back into the game with one attack. That was clearly on the minds of City, who stepped up their intensity towards the end of the first half, getting a deserved second when Laura Coombs collected a blocked shot from Mewis and fired into the roof of the net from the edge of the area.

The noise from the City sidelines, once again, made it seem like there was an actual away following at Leigh Sports Village. The home support would not have been any louder than the silence from the few stewards and guests dotted around the stadium.

Stoney mentioned in her pre-match press conference that she has no issues with making changes at half time, and that she needed her full squad to contribute to a winning effort. It was no surprise, then, to see Kirsty Hanson come on at the break in place of Jess Sigsworth to offer a bit more attacking impetus.

The change, and whatever was said at half-time, clearly worked, and United were level soon after the restart when Tobin Heath collected the ball just inside the area and smashed home a thunderous effort from an angle. Heath, who before the match had described City as a small team compared to United, had put her money where her mouth was, and gave United a huge confidence boost in the process.

And although City still had chances of their own, they couldn't stop United equalise when substitute Hanson turned home a rebound from a corner, moments after Millie Turner had seen her own effort blocked on the line from the exact same corner. Out of nowhere, and United were level.

Stoney's pre-match words regarding her substitutes couldn't have been proven any clearer, with all three changes making an impact on the game - Lauren James helping the ball stick in attack, Hanson getting the equaliser, and Lucy Staniforth helping to balance the shape of the second half approach.

United, and Stoney, deserve credit for their second half turnaround and they were as good after the break as they were poor before it. The noisy City bench kept their volume, but the shout were clearly more nervous as the second half wore on.

The build up to this game had been all about the new roles each side was taking on, with United arguably the favourites. By full time, we are no nearer to knowing where the power lies in Manchester, with both sides taking a 45 minute spell to state their case.

In the end, a draw felt fair, and both sides will go again on Thursday when they meet in the Continental Cup. Maybe then we'll be clearer to knowing what colour Manchester is. What is for certain, though, is that neither side will let the other take that power without a fight.