Donny van de Beek is still the only Manchester United player to score at Old Trafford from open play this season in the Premier League. That... 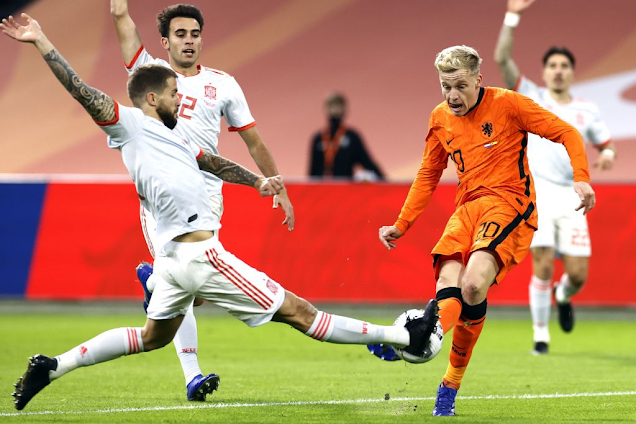 Donny van de Beek is still the only Manchester United player to score at Old Trafford from open play this season in the Premier League.

That is a striking stat considering he has not started any of these games. Overlooking him appears to be a big mistake.

Van de Beek issued another timely reminder of his quality with an international goal for the Netherlands against Spain last night.

The quality of opponent he has scored against is notable. These aren’t minnows, even if neither country’s teams are what they once were.

The goal was typically well taken. Van de Beek ghosted in at the edge of the penalty box unmarked, and when the ball found it’s way through to him, he lashed it into the net first time.

It was good to see Van de Beek scoring from the right too. Juan Mata played on the right side of attack against Everton and put in a solid yet replaceable performance.

Van de Beek could potentially come in for him and play alongside Bruno Fernandes. United need to find a way to work him into the side.

It’s clear United can’t drop Fernandes, and with Mason Greenwood not playing regularly from the right at present, Van de Beek can slot in there.

United’s next match is a home game against West Brom and it would make a lot of sense to see Van de Beek in the starting line up.

This goal was another message to Ole Gunnar Solskjaer that he will step up if the manager calls on him. It is time he had a proper run in the side.

"Van de Beek starts regularly and scored in back to back games for the Netherlands, Pogba is a constant regular for the best international team in the world. Neither can get a game for a team placed 14th in the Premier League. This could only make sense at @ManUtd"