Raphael Varane eluded Man United manager Sir Alex Ferguson in 2011 and they ended up with Phil Jones. Ten years on, United have a chance t... 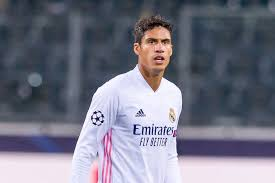 Raphael Varane eluded Man United manager Sir Alex Ferguson in 2011 and they ended up with Phil Jones. Ten years on, United have a chance to sell Jones and sign Varane.

Manchester United spent £80million on a centre-back last year and still need a centre-back. The world record fee they shelled out for Harry Maguire was inevitable after the costly refusal to back Jose Mourinho the previous summer, although that is not United's version of events.

United claimed they were prepared to spend £100m on a centre half if the ideal target was available. The specific example namedropped by a senior club suit was Raphael Varane, yet the mere mention of Varane drew a withering rolling of the eyes from the jaded Mourinho.

Ed Woodward had touted Varane and Marco Verratti as elite options at the start of the 2018 summer window but Mourinho did not consider either to be attainable. United bought Fred from Shakhtar Donetsk for £52m but ended the window devoid of a new centre half and had their worst defensive campaign in 40 years.

Varane's value then was comfortably north of £100m 12 months on from the watershed summer of Neymar's £198m transfer. Varane had just accumulated another Champions League and the World Cup, was only 25 and contracted to Real Madrid for four more years.

His deal still runs to 2022 and Varane's valuation is now comfortably south of nine figures. Madrid have gone two years without hoisting the European Cup - a drought by their standards - and Varane was a walking disaster in their round-of-16 elimination by Manchester City. "After the match against Man City, he's been a shadow of himself," Karim Benzema's agent, Karim Djaziri, said of Varane on Twitter last week.

Just over a week ago, Varane was on the scoresheet again - accompanied by the dreaded 'OG' acronym. Varane has tallied two own goals in the last month and he has put through his own net more times in his career than Phil Jones.

It was Jones whom United turned to after Zinedine Zidane's 11th hour intervention with an 18-year-old Varane in 2011. "I hurtled down on the train from Euston to Lille to sign the young French defender Raphael Varane," Ferguson wrote in Leading in 2015. "David Gill was getting into the finer points of the contract with Lens when Zinedine Zidane got wind of this and somehow scooped him up for Real Madrid from under our noses."

A decade on, United have an opportunity to get their noses in front as Varane approaches the last 18 months of his Madrid contract. Some will scoff at the mere suggestion of interest and have seen this movie before (Sergio Ramos in 2015). Varane could use any speculation to increase his Madrid salary and leave United by the wayside again.

The possibility of signing Varane 10 years on still has to be explored. An agency source reiterated 'lots of clubs' like Varane but none have mooted a potential deal. Varane switched to the Base Soccer agency United have a productive relationship with in September and he does not turn 28 until April - that falls into United's preferred age range of targets that they disregarded with rookies Facundo Pellistri and Amad Diallo and the seasoned Edinson Cavani.

Varane's stock is high enough he is expected to start for France at the European Championship and his athleticism and speed would be the ideal complement for Maguire. Amid a dearth of leaders, United would benefit from the presence of a four-time European Cup winner with a World Cup winner's medal to transfer from his safe deposit box.

The mention of Varane's name does not evoke haunting memories of a past exotic flop, as Cavani did with Radamel Falcao. Varane has played over 40 games in each of the last four seasons and his durability is not a concern as it was with that other World Cup warhorse Bastian Schweinsteiger. There is no indication - to date - United would be imposed on him as was the case with Angel di Maria. Varane is a boyhood United fan whose hero was Rio Ferdinand.

Varane has already left a legacy at United without ever playing for them. The academy bought French teenagers Hannibal Mejbri and Willy Kambwala for €13m over the last 18 months and in 2018 the United website advertised for a 'First Team Scout' role in France 'to identify world-class and emerging talent for the club'.

Madrid could restart their Galáctico programme in the summer, with Pogba and Kylian Mbappe - also both out of contract in 2022 - on their radar. The pandemic has caused market depression but Varane's international teammates could easily command the best part of €200m between them. Varane would cover some of the costs.

While Zidane is his coach, there is likely to be resistance but Varane's situation is there to be exploited by United, just as Madrid have exploited United players' stand-offs in the past. And they wouldn't have to pay £100m.