Manchester United 'have not given up hope of signing Ousmane Dembele', with Ole Gunnar Solskjaer set to make another attempt to land the Barcelona winger on loan in January

Manchester United are still hopeful of signing Ousmane Dembele on loan The Premier League side failed to complete a deal for the forward in ... 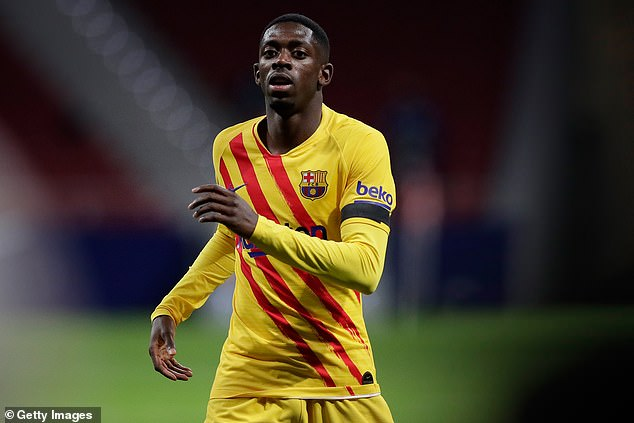 Manchester United have not given up hope of signing Ousmane Dembele on loan and could return for the Barcelona forward in January, according to reports.

United failed to secure a deal for Dembele in the summer but, on his Here We Go podcast, Italian transfer expert Fabrizio Romano claimed the 23-year-old is still a target for Ole Gunnar Solskjaer.

The Premier League side are reportedly only interested in a short-term deal, which proved to be a stumbling block in the summer negotiations with cash-strapped Barca wanting to sell the striker.

They wanted the money to help new manager Ronald Koeman rebuild his side - the Dutch boss made no secret of his desire to bring in Memphis Depay from Lyon.

That position still remains but Barca will be keen to avoid losing Dembele on the cheap with his contract set to expire in 2022, if United considered a permanent move.

Barca are said to be working on negotiating a new contract with the Frenchman after his decision to reject an extension prompted the initial interest from United.

It is believed the forward 'appreciates' the steps Barcelona have taken to put fresh terms in place but, for now, uncertainty lingers over his immediate future.

Dembele has started the last three league games following the injury to Ansu Fati and has three goals in all competitions.

With Fati out for around four months, the Catalans will be reluctant to let Dembele leave the Nou Camp without having a replacement lined up.

Dembele signed for Barcelona from Borussia Dortmund in 2017 in a staggering £133.5m transfer after the departure of Neymar but a string of hamstring and thigh injuries have played a part in preventing him reaching his potential.

The forward is said to have other clubs interested in signing him but Barca are looking for a fee between £60-70m.

After missing out on Dembele, United signed Edinson Cavani on a free transfer following his release from Paris Saint-Germain.

Marcus Rashford is United's leading goalscorer in all competitions with 14 goals, closely followed by Bruno Fernandes who is on 13.

Dembele has found the back of the net more times this season than Anthony Martial, Mason Greenwood and Cavani, who currently have five goals between them.