Man United won at Old Trafford in the Premier League for the first time this season and this is how the players rated. David de Gea Got th... 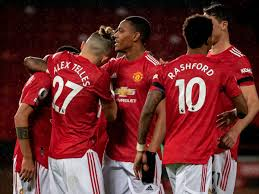 Man United won at Old Trafford in the Premier League for the first time this season and this is how the players rated.

Got the finest of touches to tip Karlan Grant's deflected effort wide. Made one of his classic toe saves from Conor Townsend seconds before United won a penalty. 8

Non-existent in attack too often again despite the reticent approach from West Brom. Just does not do enough going forward. 5

Did not appear to be hampered by his back problem and helped United to a clean sheet. 6

The only one who acted like a proper United player from start to finish and started the breakaway Anthony Martial should have finished. 6

Took some time to adjust to the demands and there were some loose moments and his speculative shooting was awry. 6

Suffered the ignominy of a nutmeg but did little wrong. The trouble was United did not needed two steely midfielders against the 18th-placed side. 5

Tidy enough with the ball and tried to get United on the attack but rarely played a memorable pass. 6

Too passive too often in the first-half but his cross was handled and earned United a penalty. Made way for Cavani on the hour. 5

Set up Martial for an easy chance but became so frustrated he withdrew into a deeper role. Lucky not to have the penalty conceded stand and lucky he got to retake his saved spotkick. 6

Rusty after coming back from injury and wasted a great opportunity to all but kill the game in the second-half. 4

Had an early header saved before he squandered a gilt-edged chance soon after. Was going through the motions at times. 5.

Replaced Fred to protect the lead. 5.

Overestimated West Brom by starting Matic with Fred and should have made a change at half-time. Cavani for Mata was an adventurous move. 6