Man Utd Under-21s lost 4-0 against Morecambe in the Papa John's Trophy on a tough night for Neil Wood's side. Facundo Pellistri du... 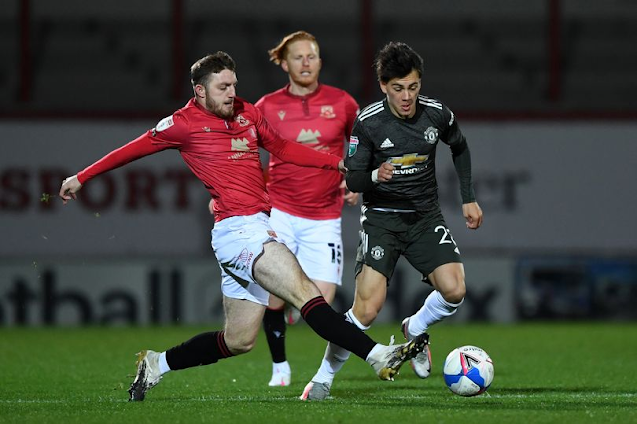 Man Utd Under-21s lost 4-0 against Morecambe in the Papa John's Trophy on a tough night for Neil Wood's side.

Manchester United's Under-21s conceded three goals in 10 first half minutes to leave themselves with an impossible task against League Two Morecambe.

Ryan Cooney's first half double salvo and Harry Davis' strike left United trailing 3-0 on a difficult evening for Neil Wood's side in the Papa John's Trophy.

United had included Facundo Pellistri in a competitive side for the second time since his summer transfer from Uruguayan outfit Penarol. But neither Pellistri nor captain Teden Mengi could cope with the ruthless hosts, who stretched their lead in the second half thanks to Freddie Price and ran out 4-0 winners.

The game at the Mazuma Stadium was effectively a dead rubber given that United had already booked their spot in the next round, with Morecambe bottom of the group, even after this win.

The scoreline was a little harsh on United, who started promisingly, but in truth they did not trouble the Shrimps goal often enough and made errors at the back.

Pellistri was involved straight away, drifting inside into the No.10 position from his right wing station and was nearly slipped through by Mejbri. Mengi was then lucky not to concede a penalty after getting in tangle.

In truth, despite offering promise in the opening 25 minutes, United's defence always looked shaky in a first half that will have disappointed Wood. Yet took it fine strike from Cooney to secure the lead for Morecambe, his curling effort beating Paul Woolston's goal.

But United made things hard for themselves, gifting possession to the confident, physical and determined hosts and within two minutes of the opener, Cooney had another. This time he pounced on a loose ball and danced between defenders to slot home for 2-0

It got worse for United before the break, as Davis converted from close range after ghosting in unmarked from a corner. And only an acrobatic save from Woolston and the United crossbar prevented it from becoming 4-0 before the half time whistle sounded.

United did improve marginally after the interval, with Mengi striking at goal within 60 seconds of the restart.

But they continued to leave gaps for Morecambe to exploit and, on 62 minutes, Price added a fourth via the woodwork.

Morecambe might have had more had it not been for Woolston's saves and the skipper Mengi, who despite an off-colour performance, continued to battle away in defence. He, Pellistri and the rest will have learned plenty of vital lessons in this defeat to senior and more savvy opponents.