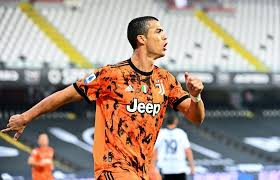 Since joining United from Sporting CP, Fernandes has maintained a good relationship with Ronaldo, who also played for the Portuguese club before famously signing with the Red Devils in 2003.

Despite being one of United’s most promising stars, Fernandes hasn’t been shy about his admiration towards CR7’s overall qualities as an athlete.

In a recent interview with Sky Sports, the 26-year-old vividly recalled how the five-time Ballon d’Or winner became his “favorite player.”

"Everyone knows Cristiano [Ronaldo] was my favorite player,” Fernandes admitted. “I think it was a little bit of everything. When Cristiano began to take his first steps in the national team, it was in the Euros in our home country, so I was nine years old.”

"That year stays with everyone because we lost the final in Portugal, we saw him crying after the final, he was a young boy who was starting to shine and from there I started to watch him,” he continued.

Like a fine wine, Ronaldo consistently proves that age is just a number. In terms of scoring, the Juventus striker has continued where he left off last season, improving his tally to 10 goals for both club and the national team.

But for Fernandes, it wasn’t Ronaldo’s nose for goals that motivates him. Instead, the midfielder is more fueled by his idol’s “mentality” and eagerness to always strive to become a better player.

"It wasn't because he [Ronaldo] plays in my position because that wasn't the case, but it was the way he worked every day, the mentality he had, the capacity he had to give 100 percent in every game at a high level, for me, it was like a motivation, like you always have to do better,” he pointed out. "He was scoring goals every game, but game after game he was still trying to improve, get better."

“Cristiano has had bad games, 100 percent - but the point is, (it’s about) coming back from a bad game, coming back with the mentality that is, ‘ok I didn't play well in that last game and I really need to do well in this one’. The mentality to do better day after day is really important for me. I'm improving a lot because of this, and that was my biggest motivation."

Ronaldo is being linked to a return to Manchester United following reports claiming that the 35-year-old is considering leaving Juventus.