The Manchester United star was wasteful in the final third during his country's latest Nations League outing, according to his nationa... 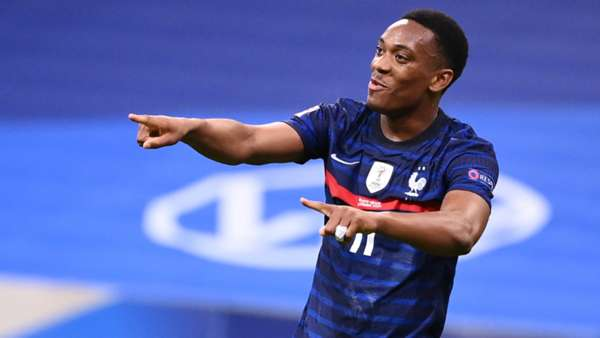 The Manchester United star was wasteful in the final third during his country's latest Nations League outing, according to his national team boss.

France head coach Didier Deschamps says Anthony Martial was a "bit clumsy" and his finishing was "lacking" against Portugal.

France booked their place in the finals of the competition by beating Portugal 1-0, with N'Golo Kante netting the all-important winning goal in the 53rd minute.

Les Bleus might have earned a more emphatic victory had Martial made the most of his chances, but he twice failed to find a way past Rui Patricio after being played through on goal.

The Manchester United striker has only scored once for his country in 25 appearances, and is still on the lookout for his first goal of the 2020-21 campaign after drawing another blank on the international stage.

Although Deschamps was disappointed that Martial was unable to convert any of his opportunities against Portugal, he acknowledged the fact the 24-year-old has only just returned to the France set-up and is still finding his feet.

"His finishing was lacking - it seemed a little bit clumsy," the France boss told a post-match press conference.

“But sincerely, having watched the moments again, it came down to small margins.

“He is part of the group of players who have not been here for a long period of time, but he has changed during this period, on the pitch and off of it.”

Deschamps' men will conclude their League A, Group 3 campaign when Sweden arrive at Stade de France on Tuesday, with Martial in line to make his second consecutive start.

The French forward will then return to Old Trafford ahead of United's Premier League meeting with West Brom on Saturday, which they can ill-afford to lose after slipping to 14th in the standings after seven fixtures.

Martial's barren run in front of goal continued upon his return to action following a three-game suspension when the Red Devils beat Everton 3-1 on November 7, and he is now facing extra competition up front from Edinson Cavani, who came off the bench to score the final goal of the match at Goodison Park.