The midfielder has scored just one goal in all competitions this season and feels he should have bagged a few more by now Scott McTominay ... 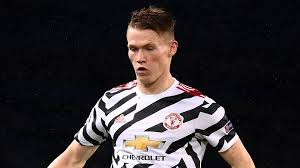 Scott McTominay says he wants to add more goals to his game for Manchester United.

The 23-year-old midfielder has featured 94 times in all competitions for the Red Devils since his debut three-and-a-half years ago and has netted eight times along the way.

But he admits he has had enough chances to improve on that tally for Ole Gunnar Solskjaer's team and hopes to become more prolific.

“I need to score more. Something in your mind just clicks together and you start to have a real belief," he told the club's website.

“Against Chelsea [in October], I had the first contact and should have done better, whenever you’re getting in from a corner. The game before, in Paris, I had two opportunities. So it is just that mentality, going into games really believing you can score goals.

“I was just watching Harry [Maguire] and how many first contacts in the box he gets. I was like, well, why can’t I do that? I’m the same size as him. It’s just a little mindset tweak that can really make the difference."

McTominay feels the chances the Old Trafford side create in set-piece situations offer him a way of improving on his current record.

"The options we have when delivering wide free kicks and corners are amazing and we saw that in Paris in the Champions League game," he added.

“The quality we have is amazing and it’s up to me, Paul [Pogba] or Nemanja [Matic] or Harry [Maguire] or Victor [Lindelof] or Axel [Tuanzebe], the ones who are playing, to really go and make them count.”

United are 14th in the Premier League table with 10 points from seven matches - eight adrift of current leaders Leicester, who have played one more game.

Solskjaer's side return to domestic action on November 21 with a home game against West Brom before they turn their attention to the Champions League when they host Turkish side Istanbul Basaksehir.