Manchester United's first fixture after the international break has been moved back by five hours to accommodate live TV coverage in t... 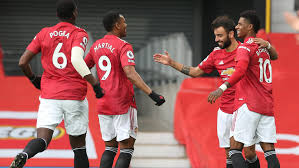 Manchester United's first fixture after the international break has been moved back by five hours to accommodate live TV coverage in the UK.
The Reds will therefore still return to action on Saturday 21 November but the home Premier League meeting with West Bromwich Albion will now kick off at 20:00 GMT at Old Trafford, instead of the provisional time of 15:00.
The game will be shown live on BT Sport.This is the only United fixture in today's Premier League announcement, which only covers the broadcasters' selections from 21 to 30 November.
Our other league game in that window, Southampton away, has already been picked for live TV in the UK and will be shown on Sky Sports at 14:00 GMT on Sunday 29 November.The Premier League has also confirmed that all of its games from next weekend, and throughout the Christmas and New Year, will be made available for fans to watch live in the UK on the existing services of BT Sport, Sky, Amazon and BBC.Details of when the December and January fixtures will be played, and on which channels they will be shown, are to be announced in due course.