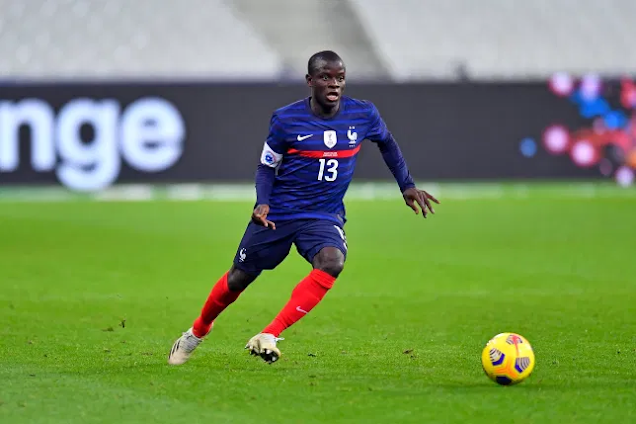 Chelsea midfielder N’Golo Kante says it is a ‘pleasure’ to play alongside Manchester United’s Paul Pogba for France’s national team. Kante and Pogba were at the heart of France’s midfield once again as the Chelsea midfielder scored the winning goal in his nation’s 1-0 victory over Portugal on Saturday.

Pogba and Kante are undefeated in the 26 matches they’ve both featured in for France, with an incredible 20 wins and six draws. Pogba admitted on Sunday evening that playing for France is a welcome respite following his ‘difficult period’ with Manchester United.

And Kante also says he is happy to link up with Pogba. ‘Yes it is true, with Paul it has been a little while he’s been injured, a little while since I played with him,’ Kante told TF1.

‘We all remember the World Cup, that whole adventure we did together, the qualifications stage and the competition, and it is a pleasure again to be playing with Paul in the national team. ‘Against Portugal we had a good game and we are all satisfied with our performance.’

Despite their strong record together, Kante insists there is more to France than his midfield partnership with Pogba. ‘I think it is not that simple,’ said Kante.

‘We are all together, it is not just Kante and Pogba, but the whole team. ‘We are happy that we have never lost when we have started together, I hope that will continue for as long as possible, but these are victories and draws for whole team, not just us two.’ Follow Metro Sport across our social channels, on Facebook, Twitter and Instagram. For more stories like this, check our sport page.